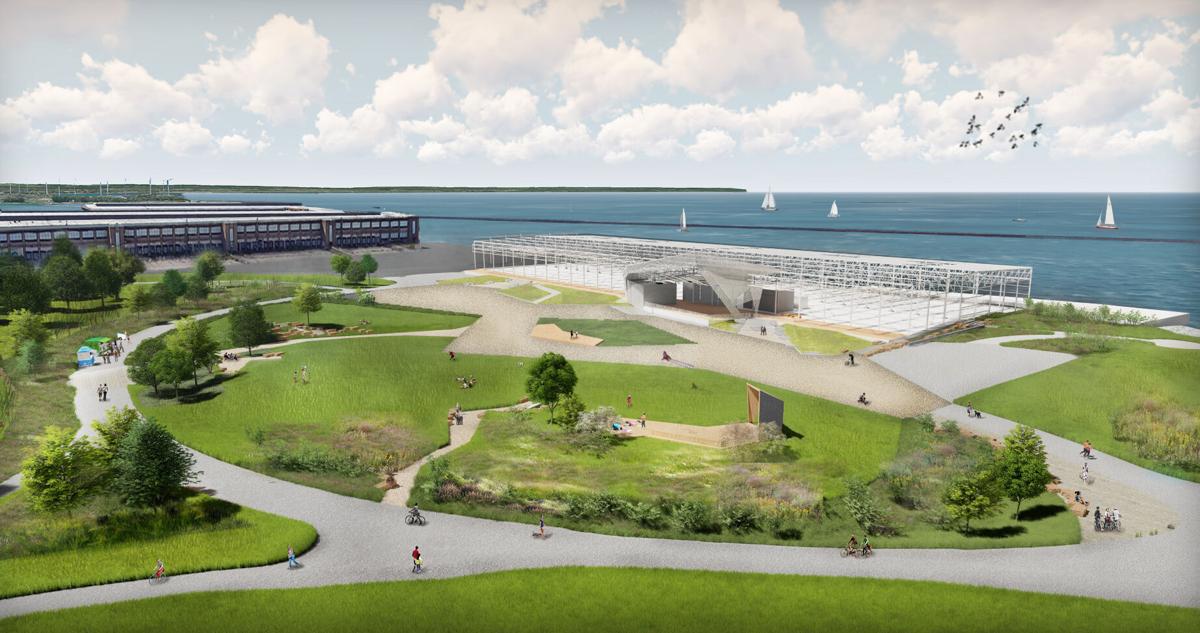 Originally Published in The Buffalo News

A planned but controversial new amphitheater at the Outer Harbor surpassed a key hurdle Monday, but not before environmentalists and other opponents lambasted the proposal as harmful and against the desires of Buffalo’s citizens. The Erie Canal Harbor Development Corp. got the green light from the city Planning Board for its $12 million project to convert the derelict former Terminal B site on Fuhrmann Boulevard into an open-air pavilion, which would host the relocated Canalside summer concerts, as well as other major events and fundraisers. It would be capable of hosting up to 8,000 people on its sloped crescent-shaped front lawn and surrounding areas, with open views of the lake beyond. And it would be connected by paths and greenscape to the completed nearby bicycle park, pedestrian paths and natural habitat that the state agency has already been working to create.”We are bringing the public closer to the water, in an area that has not been accessible to the public for quite some time,” said Mark Wendel, the agency’s senior director of design.

He noted that the Outer Harbor area has already hosted one large concert, the Irish and Italian festivals, movie nights, the Thunder on the Buffalo Waterfront airshow, and several not-for-profit charity walks, and those could move to the new location to take advantage of the stage. But only about 8-10 of the largest events are expected each year. “It’s not every weekend utilization,” Wendell said. But critics roundly attacked the plan, both in verbal testimony to the board and in more than 28 written letters sent in advance. They said the state agency had ignored public input and opposition, and disregarded their preference for the site to become part of the state park, open to passive and recreational use.“Public comments have been overwhelmingly negative against this additional concert venue,” said John Whitney, chairman of the Western New York Environmental Alliance, which is one of several organizations that has already sued to block the plan.

“We think it’s inappropriate to allow this proposal to move forward while this matter is being litigated.Opponents said the plan doesn’t address climate change and doesn’t comply with the Green Code. They said it would harm the environment for migratory birds, water fowl and other species, encourage too much car traffic and pollution, and generate excessive noise. “I’ve done sound for concerts. Every concert down there will violate the city’s noise ordinance,” said Daniel Sack, a professional sound engineer. “The city doesn’t need this concert venue.”James Smith even noted that there’s already an alternative amphitheater that has been proposed for the new Ralph C. Wilson Jr. Centennial Park. Critics also said ECHDC, as an economic development agency, is the wrong organization to spearhead the Outer Harbor effort, when many people have called for the entire area to be declared a park. “Any destruction of the existing landscape should be halted until it is decided if it should become a park,” said Linda Schneekloth, a member of the Environmental Alliance and the Grandmother’s Council of Western New York.

Steve Ranalli, ECHDC’s CEO, noted that the amphitheater was part of the larger $150 million plan for the entire 200-acre Outer Harbor that the agency’s board approved earlier this year – after five years of community-wide planning that saw significant public input through forums, stakeholder groups and online surveys. Even the environmental groups supported the plan, he noted.The process also included a brownfield opportunity assessment, new zoning by the city, and a coordinated waterfront revitalization plan. “We tried to do a good job to reach out to a wide swath of the community in all of those meetings,” Ranalli said. “We’re trying to consolidate our large-scale events to this location.”He also noted that Terminal B is not located in the park area, but in a mixed-use neighborhood zone. “It’s going to transform an abandoned warehouse into an amenity for the residents of Buffalo and Western New York,” Ranalli said. “It will showcase Buffalo at its best.”

The Planning Board’s approval would mark a major change for the vacant building, a longtime eyesore on the Lake Erie waterfront pier that has defied years of efforts to rethink how it can be used. The building’s foundation is integrated with the sheet-pile walls of the shoreline, Ranalli noted, so “we always planned to reuse the building in some way.”Under its plan, ECHDC – which oversees both the 200-acre Outer Harbor and Canalside – intends to tear off the exterior shell of the building at 901 Furhmann, leaving its 100,000-square-foot steel frame on an elevated concrete slab, with stairs and ramps that would be added along the perimeter for pedestrian access. A small stage with an open-air canopy would be added on the north end, facing east.

That’s where the landscape will be changed to reduce the 12 acres of paved surface, improve drainage and lighting, and increase greenspace, while taking out invasive species and replacing them with natural growth. The area to the north would become meadow. An overlook deck, bicycle trails, bike racks, habitat restoration area, walking path and limited lighting will also be added or extended, near the new Great Lawn and bike complex that were completed two years ago. Seven acres of the site will also be remediated, while the deteriorating parking lot alongside Terminal A would be repaired and reused for large-scale events, with 1,500 spaces. No additional parking is planned, and officials highlighted the ease of access to the site by foot or bicycle from either direction, including the bicycle ferry from Canalside.

Another 500 parking spaces are also already available along Fuhrmann.”Overall, if there are going to be major events at the waterfront, this is a pretty good solution,” said Board Vice Chair Cynthia Schwartz. “This plan removes a whole lot of concrete and hard surface. I like the approach to reusing the skeleton of Terminal B.” But that’s not good enough for critics. “The Outer Harbor is a park, and a park can be a natural landscape, which is what the people of Buffalo have been asking for since 1982, over and over and over again,” Schneekloth said, citing the evolution of the landscape over the past 40 years. “Not for an entertainment venue. Not for a place to raise money. Not for games.”

Schneekloth said she had “no problems with the reuse of the building,” which she called “an appropriate thing.” But she complained about the additional loss of more trees and “functioning habitat” around it, and its replacement with lawn. “We have concerns about the landscape,” she said. “A grass lawn is a desert.”Planning Board members agreed, and pushed the state agency to agree to convert one-third of the three-acre Great Lawn into a butterfly garden along the edges, to restore some natural habitat. The other two acres would remain open for such uses as kite-flying. The board also imposed an unspecified decibel level on the sound from concerts.

“Every time we have a chance to increase nature use into these sites along the waterfront, we should take advantage of it,” Schwartz said. “I think the Great Lawn is secondary and it’s an opportunity to provide more natural area that buffers this site.”The Planning Board also recommended that the Common Council re-approve a special-use permit for the project.