After Slew of Setbacks, DL&W Resurrection Back on Track with Savarino as Developer

Buffalo’s Delaware, Lackawanna and Western Railroad Terminal is on the way toward reclaiming its legacy as a bustling center of waterfront activity.

Niagara Frontier Transportation Authority commissioners on Thursday awarded “pre-development rights” to the Savarino Cos. of Buffalo for redeveloping the second floor of the cavernous train shed at the foot of Main Street. Savarino and the NFTA now begin a partnership they hope will transform its 130,000 square feet into a downtown attraction that “fosters commerce, social gathering, community and a sense of place.”

“It’s a good proposal,” said NFTA Executive Director Kimberley A. Minkel. “I’m excited about this, what it can mean for the public, and for the first time in many years, engaging that space.”

Vacant since the last Erie-Lackawanna passenger train departed in 1962, Savarino Cos. President Samuel J. Savarino has long eyed the terminal as ripe for development. Indeed, he lives across the street in redeveloped property at 95 Perry St., and is now eager to implement his vision for a “diverse public space engineered for active public use.”

“With the new Metro Rail station soon to be completed at the terminal … such use represented proper and complementary transit-oriented development,” Savarino said. “Our team is very pleased that the NFTA has endorsed our idea.”

Long proposed but never previously acted upon, Thursday’s action spurs only an initial project that still faces a host of challenges. But for the next 18 months, the new plan calls for Savarino to hire the Project for Public Space consulting firm for a feasibility study aimed at generating public and commercial activity at the DL&W.

Following completion of the initial phase in 2022, Savarino can extend the agreement another 12 months for a $36,000 fee. In return, the NFTA grants the company exclusive “pre-development rights” in the space above its Metro Rail Yard and Shops complex for a possible public market, small business incubator, museum, flexible event/gathering space, artist studios, food hall, shared community kitchen or public gardens.

Savarino is expected to study the possibility of pickleball courts for the outdoor “patio” that DL&W trains once used as a station approach, as well as 6,500 square feet of first-floor space for a possible waterfront cafe and floating docks on the adjacent Buffalo River.

A key part of the company’s process will be gaining public input on its wants and needs at the DL&W.

“It’s important to us and the Savarino Cos. that they hear from the public how the space is to be used,” Minkel said.

Still, she emphasized that no substantive second-floor work can begin until the NFTA completes a $20.5 million reconfiguration of track and overhead wires leading to the Yard and Shops, part of an overall $46 million project largely funded by New York State. The ongoing project will result in a new Metro Rail stop on the Buffalo River side of the station, and ultimately access via stairs, escalators and elevators to the second floor.

“The station won’t have any access to the second floor until 2022,” she said. “So no development can really occur until we can get people to that space.”

The NFTA, meanwhile, emphasizes the DL&W will become an integral part of the Metro Rail system with the new station in 2022.

“It should increase Metro Rail ridership and enhance the customer experience,” Minkel said. 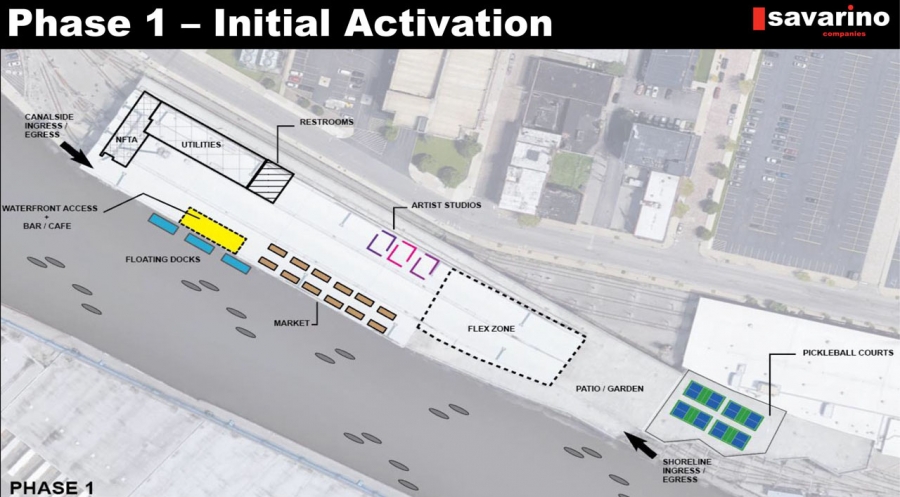 Several problems and setbacks have dogged the project in recent years, though the NFTA has never wavered in its commitment to its “historic gem” built in 1917. The setbacks include:

• Failing in three attempts to obtain a federal grant for the effort.

But Minkel said the grant would have funded only about $6 million for amenities that may eventually result from other sources such as new market and historic tax credits, or even private foundations.

The NFTA remains confident that the project can proceed, the executive director said.

• Seeing a planned skybridge over South Park Avenue between the terminal and KeyBank Center put on hold because of unanticipated costs associated with a maze of underground utilities. But authority planners say the project can proceed without that connection on the north end of South Park Avenue.

• Only the Savarino Cos. responded to the NFTA request for a DL&W proposal, reflecting the Buffalo development community’s wariness about the project. But Savarino says his company remains bullish, with more plans on the drawing board.

“Immediately, we will begin negotiations on a more detailed development agreement between Savarino Companies and the NFTA that will provide a foundation for the success of the Terminal Public Market,” said Courtney Cox, Savarino development director. “At the same time our team will be taking the first steps in the collaborative and participatory process of ‘placemaking.’ ”

Minkel said the NFTA is encouraged by Savarino’s interest, noting the company’s record of development in the burgeoning Canalside and Cobblestone districts adjacent to the DL&W.

“If this was easy to do and develop, we would have had proposals years ago,” she said. “This developer has a track record of success, particularly within this neighborhood. So we’re confident we have the right partner to help it advance.”