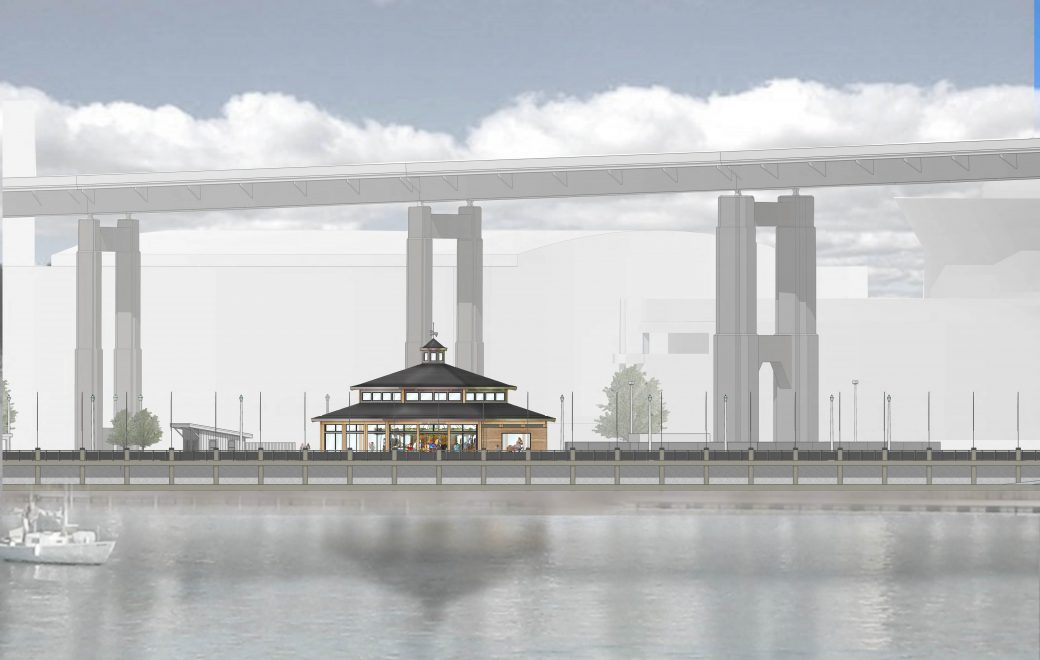 ‘Another Piece of the Story of Buffalo’: Canalside Carousel on Track to Open in July 2020

Originally Published in The Buffalo News
September 9, 2019
By Mark Sommer

Gov. Andrew Cuomo said four years ago that a carousel “should be the jewel on the top of the Canalside crown.”

That day is getting closer.

The Erie Canal Harbor Development Corp. on Monday approved the $5.3 million attraction, putting the solar-powered carousel on track to open at Canalside in July 2020. The agency will request transfer of the land from the City of Buffalo, set site preparation in motion and authorize a long-term lease with Buffalo Heritage Carousel, allowing the release of $1.2 million committed by Cuomo in 2016 when he made the remark.

“I just think it’s going to be great,” said Steven Ranalli, president of the waterfront agency. “The color and the sound will really amplify the southern end of Canalside and tie into the beach and Clinton’s Dish.

“It’s another piece of the story of Buffalo,” Ranalli said. “Carousels were a big part of Buffalo’s story by being made in North Tonawanda for so many years.”

“Today represents a milestone date in our timeline for this project,” LaDuca said. “We are excited to know we are so close to seeing this rare and historic carousel operational.

“After more than 60 years in storage, it will finally give this carousel a new home in Buffalo, New York, for generations to enjoy,” LaDuca said.

The Buffalo Common Council is expected to approve the land transfer for $1 next week. The design for a classically inspired roundhouse is expected to be approved by the waterfront agency’s design review committee and then the committee at its next meeting in October, followed by a groundbreaking later that month.

The $4 million multisided roundhouse, with glass partitions between wooden columns, will have a double-pitched metal roof with integrated solar panels and large windows.

The 7,000-square-foot building will be open-air in the summer, and have a 13-foot-wide walkway around the inside of the roundhouse, with a handicapped-accessible ramp.

“It’s reminiscent of the carousel structures during the golden age of the carousel from 1905 to 1925, but it’s also more clean-lined to fit today’s detailing,” Hauer-LaDuca said. “I like that the building represents the function, and conveys the excitement of what’s inside.”

The carousel, with more than 400 lights, will have no trouble being seen after the sun goes down.

“At night it will be like a beacon on the boardwalk,” Hauer-LaDuca said.

The three-row, park-style menagerie carousel was the most fanciful model and one of only about 20 ever produced by the four Herschell-Spillman carousel companies in North Tonawanda. It will be the 10th in operation in the country, Hauer-LaDuca said.

The three chariots include a custom-carved, handicapped-accessible Erie Canal boat; an original, two-bench chariot with carved dancing goddesses on the side; and a replica of the original rocking gondolier.

Few doubted the carousel’s potential as an attraction, but the project has had its ups and downs getting to this point.

Differences over siting, scale and funding had to be overcome between Buffalo Heritage Carousel and the waterfront agency.

Only four animals, three chariots and the scenery panels remain to be painted, she said.

The carousel is set to open the same month as the Longshed, under construction on the wharf. Buffalo Maritime Center will use that space to lead a two- to three-year community project to build a replica packet boat in anticipation of the bicentennial of the Erie Canal in Buffalo.

“I think the carousel is ultimately going to be a really nice bookend along the Central Wharf to the Longshed, with the green space in between,” Ranalli said. “I think all the cultural attractions will provide a full day’s work of amenities down there, with the naval park, the Longshed, the children’s museum and the carousel.”

The Buffalo Heritage Carousel has raised $4.3 million but still needs another $1 million, plus an additional $250,000 for a reserve fund.

The Margaret L. Wendt Foundation spent $250,000 to purchase the carousel in June 2015, meeting a deadline set by De Angelis family members in Massachusetts, who kept it in storage since 1956. Their late father, Dominick De Angelis, owned the carousel for 28 years, and the family, believing he would have wanted it in operation again, rejected offers to sell it off piecemeal through the years, waiting for a buyer to emerge.

“When the carousel leadership came to my office to explain their proposal, I was instantly sold and knew that it would be a perfect fit for our waterfront,” Ryan said.

“The only condition I put on using the state funding was that the ride be accessible to all Buffalonians regardless of income,” he said, explaining his stipulation that rides could cost no more than $1.

Major contributions have also come from State Sen. Christopher Jacobs, R-Buffalo, who gave $500,000 in state funds; the Russell J. Salvatore Foundation, which provided $250,000; and the Buffalo and Erie County Greenway Fund, which gave $200,000.

“We have an extremely generous community, but sometimes the last dollars are the most difficult dollars to raise and we still have a challenge ahead of us,” said Corky Burger, capital campaign director.

“Today we are launching the our Race to the Finish Line Campaign, with the goal of raising $1.2 million,” he said.

Buffalo Heritage Carousel has 16 remaining wooden animals and the Wurlitzer band organ available for donors to adopt, priced from $7,000 to $100,000. The names of donors will be etched on a brass nameplate attached to the figure.