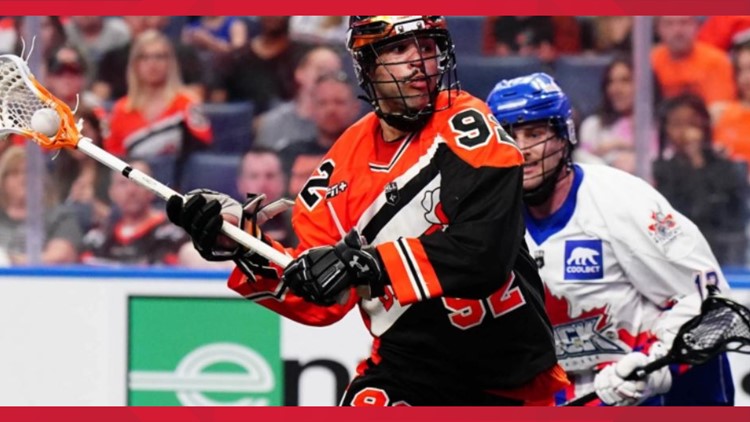 Bandits reach NLL championship round after sweep of Toronto

The Buffalo Bandits will be going for their first National Lacrosse League title since 2008.

BUFFALO, N.Y. — The Buffalo Bandits made headlines this week after Dhane Smith announced that he would donate $50 per Buffalo goal with all proceeds going to the families of the victims in the Tops shooting.

Several teammates and dozens in the community added to the trend and announced that they would match as well.

The Bandits completed the sweep of Toronto to advance to the National Lacrosse League championship round, defeating the Rock 10-9. Toronto thought it had scored as time expired, but the refs waived it off after they reviewed it and confirmed that the clock had hit zero.

The Bandits will be going for their first title since 2008. Buffalo gets a week of preparation before they play the winner of the Colorado-San Diego series.

The Bandits battled with Toronto in Game 2 in Hamilton. After scoring 35 goals total in Game 1, goaltending showed up on Saturday night. Buffalo led just 3-2 after the first half.

In the second half, four minutes in, Toronto’s Tom Schreiber tied it up. Second later, Dhane Smith set up Chris Cloutier to take a 4-3 lead.

After the Rock tied it up at 4, Dhane Smith put Buffalo back in front 5-4. Late in the third, Cloutier put the Bandits up two on the power play.

Toronto came out firing to start the fourth quarter, the Rock got within one making it 6-5 Bandits.

Smith opened the lead back up for Buffalo, Smith scored his second of the night to make it 7-5 Buffalo. Moments later Fraser put the Bandits up 8-5.

Smith got his sixth point of the night as he set up Josh Byrne to give the Bandits a 9-5 lead. The Rock respond with three straight goals, all within 60 seconds, to make make it 9-8.