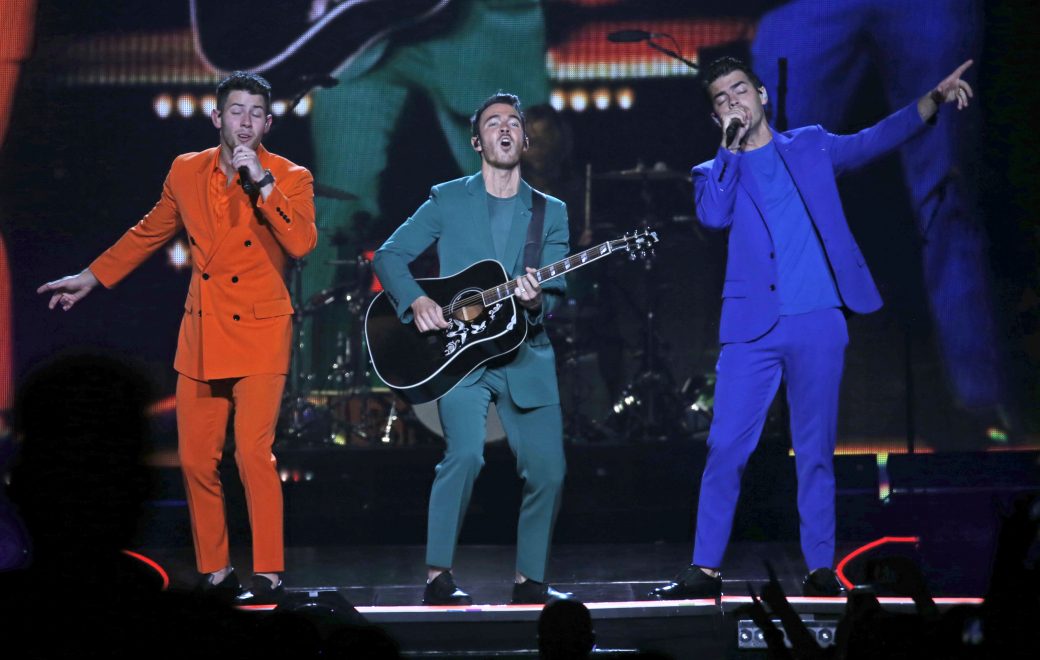 Originally Published in The Buffalo News
August 28, 2019
By Ben Siegel

Second chances are real, folks. Take local fans of the Jonas Brothers, who six years ago waited patiently in a huge rainstorm at Darien Lake before getting the sad news from a stage manager that the show would not go on. The torment. The agony. The mournful downpour of tears.

When they announced a few months later that they would be going on indefinite hiatus to pursue other projects – such as growing up, going to the grocery store, mowing the lawn – chances of another local show seemed doomed.

But “Happiness Begins” somewhere, as the title of their comeback album and world tour would suggest. The Bronai are back, baby, and for those in-waiting, they were worth it. The Jonas Brothers show at the KeyBank Center Tuesday night was a resplendent display of positivity, hope, gratitude, aww-shucks earnestness, mature wholesomeness, and plenty of upper-arm candy.

The starry twinkle in their eyes was a breath of fresh air in these cynical times; disarming might be the fairest word for it. This is a giant musical episode of “Saved By The Bell,” an arena-sized junior prom, a Shirley Temple, shaken not stirred. Nick, Joe and Kevin Jonas are almost too sweet, too true, to be believable – human Splenda.

Put another way: They are harmless, danger-averse, riskless, a wading pool of safe bets and basic chord structures. They’re kind of boring. But darling and idealistic, too – Coldplay for Teens. They appear to be genuinely grateful for the nearly 15 years of exciting career they’ve had, honed in the Disney Channel Factory. They sing live – Nick’s failing microphone throughout almost the entire show is proof of that – and strum guitars, playing songs they wrote or co-wrote. They’re a band. They pace the arena-length stage with swagger and charm. They wink a lot.

The guys open the show with “Rollercoaster” atop a floating platform littered with sparklers. Their entrance is flanked by a film sequence that reappears throughout the evening. In it, three boys (meant to be you-know-who) explore a carnival at night, the buzzing lights and whirling rides easily confused for shooting stars and rocket ships. We see them in a secluded forest and on a seaside beach, interacting with their older selves, seeing their future with vague hope. “Only Human” and “Fly With Me” underline these tropes.

An acoustic set on a satellite stage include bare renderings of “A Little Bit Longer” and “Gotta Find You.” Here, we see them in the cosmos, with flying lit globes orbiting around their elevated stage. There’s that twinkle, that sparkle that enforces a smile.

Their harmonies are tight when we can hear them. The audio mix was off the entire night, causing their lively band to overthrow whatever tender vocalizing the guys were squeaking out. (They may command arena attention but their vocals are most powerful in the studio.) Things improved in time for the angsty medley of throwback hits, a string of punk-ish garage songs from their very early pre-teen days.

Signature hits from their solo and side projects were musically more exciting than anything else: Nick’s teasing “Jealous” and “Cake By the Ocean” from Joe’s electropop band DNCE. Here, they could get away with being just a smidge more sexual, their bare arms on full display. Kevin, whose demureness always seemed overshadowed by his heartthrob brothers, sat these numbers out; he later took his jacket off, to roars.

Big hits “Burnin’ Up” and “Sucker” closed things out with lots of fire – a big flash and lights out. Until next time.

Bebe Rexha opened with a tightly planned, hook-laden set, including “Me, Myself & I,” “Better Now” and “Hey Mama.” She won plenty of new listeners, myself included – and likely Judy, the mommiest mom of all who she invited on stage to show off her noticeable dance moves. Judy killed it.

Actually, Judy could have replaced the bill’s first act with all her energy. That slot belonged to Jordan McGraw, a mixed bag of Timberlakesque falsetto, bad-boy tattoos and leather-panted flare. He doesn’t know what kind of act he is yet, and that’s OK. He might consult his father: Dr. Phil.

With Bebe Rexha and Jordan McGraw, Aug. 27 in KeyBank Center.