Canalside, Source of Pride for the City of Buffalo, NY

It was only a few years ago when the area, now known as Canalside, was an empty lot of land. Outside of the neighboring Buffalo & Erie County Naval Military Park, there was very little enticing people to visit Buffalo’s Waterfront. As a result, there was an atmosphere infused with disappointment – that the City of Buffalo, once a mighty city born from the creation of the Erie Canal, was lifeless.

To revitalize the Queen City, Buffalo would need a spark, an attraction that would jump start Buffalo’s presence on a national scale. 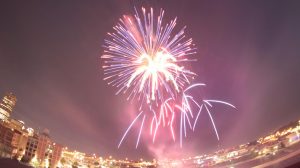 Fast forward a few years later, and you are surrounded by modern buildings that are almost as high as local’s confidence in what the city has to offer. Now, a thriving city populated with building cranes on each block, serving as a sign of economic progression, local businesses wear “Buffalo” as a badge and symbol, that Buffalo is on the rise, and there is a venue at the center of Buffalo’s flourishing culture that continues to pump pride into Buffalo.

Canalside is Buffalo’s premier outside venue, hosting a long list of concerts ranging from Rock to Hip-Hop, reaching the diverse population that calls Buffalo home. Canalside also hosts fundraising events such as Relay for Life and the JDRF Walk, which raise money to battle disease that affect not only thousands of locals in Buffalo, but millions of people across the globe.

With the free concerts every Thursday, ice skating in the winter, kayaking during the summer, and festivals to celebrate Buffalo’s culture and heritage, Canalside’s activity mimics the rapid progression of the city of Buffalo. Buffalo’s premier outdoor venue has recognized the role it has played in the revitalization of the Queen City. With that responsibility, Canalside has over 1,000 events planned in 2016 along it’s 21 acre waterfront for locals and visitors to enjoy.

There is a buzz in the air, accompanied by excitement and pride, as we watch the City of Buffalo transform right before our eyes, similar to the lot which lay empty only a few years ago. A full list of events planned for Canalside can be found on the Canlaside website – www.canalsidebuffalo.com.