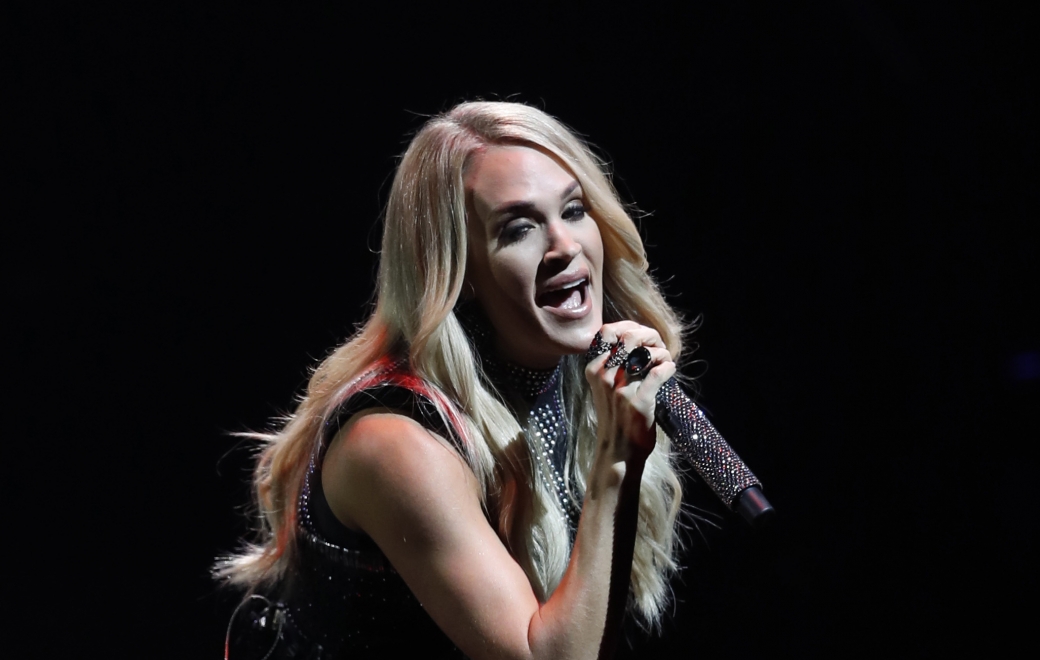 Jubilant ladies were spotted posing in front of the beaming, larger-than-life likeness of country superstar Carrie Underwood emblazoned on the side of a semi a few blocks from KeyBank Center as thousands made their way to the country star’s concert on Sunday night. The “Cry Pretty Tour 360” features Underwood and her band, and two female-fronted empowering opening acts: trio Runaway June, and duo Maddie & Tae – along with their respective band members.

The tour’s stage deserves special mention with its hydraulically lifted sections, discreetly placed ports for pyros, and large vertical scrims encircling the eye-shaped stage offering close-ups of performers. Every seat is, seemingly, a great seat on this tour. Magically, each singer appeared from below stage. Underwood would submerge during her set for four speedy outfit changes, each ensemble dramatically different. Even her handheld microphones, diva-worthy accessories, were changed.

Underwood performed material off of her six releases. Later in the set, she brought back to the stage Maddie & Tae (Madison Marlow and Taylor Dye), and Runaway June (Naomi Cooke, Hannah Mulholland and Jennifer Wayne) for a flowing and fun medley. Ten songs by “she-roes”/musical idols “who blazed the trails” hit upon masterfully crafted songs by Patsy Cline, Trisha Yearwood, and Dolly Parton.

“Southbound,” off of “Cry Pretty” (released last year) opened Underwood’s set, a song praising simple, country pleasures and connections and hitting each of her three tenets of gratitude, spirituality and self-determination. Underwood’s soaring cover of Aerosmith’s “Dream On” (Guns N’ Roses’ “Paradise City” was her rousing walk-on tune) led into her ballad “Jesus, Take the Wheel,” a set high point.

She covered George Michael’s “Freedom,” pairing it with her 2009 hit “Undo It,” announcing she was “feelin’ sassy now” before an energy shift in the show. Announcing the next number, “The Champion,” she talked about the song and its impact on her fans. “We thought we were throwing out a cool hype song,” the sort you’d listen to at the gym she’d say, but fans “told their stories,” transforming it into an anthem about persevering.

As she has been doing all tour, Underwood introduced a young singer who would be rapping the Ludacris part in the song. Sapphire from Toronto got to share the stage with an idol of hers and praise her own champion, her father, and have a selfie with Underwood – instantly shared along the giant scrims.

Following “Champion” Underwood performed her mega-hit “Before He Cheats,” a sing-along moment. It was on to the encore. Under-stage cameras showed Underwood applying her now-signature “Cry Pretty” under-eye sparkly makeup trailing downward: both resplendent and ironic. Emerging once more in a beautiful dark pink outfit, Underwood performed the eponymous song, ending with the uplifting ballad “Love Wins.”

Both openers, familiar to some fans and assuredly winning more during their 30-minute sets, proved they are talent to track. Songs of finding strength and of overcoming romantic fiascos were recurring themes. “Buy My Own Drinks,” one of Runaway Jane’s, and Maddie & Tae’s “Bathroom Floor” note that things will get better. “Girl In a Country Song,” by Maddie & Tae, challenge the sexist iconography within the male-dominated country genre.