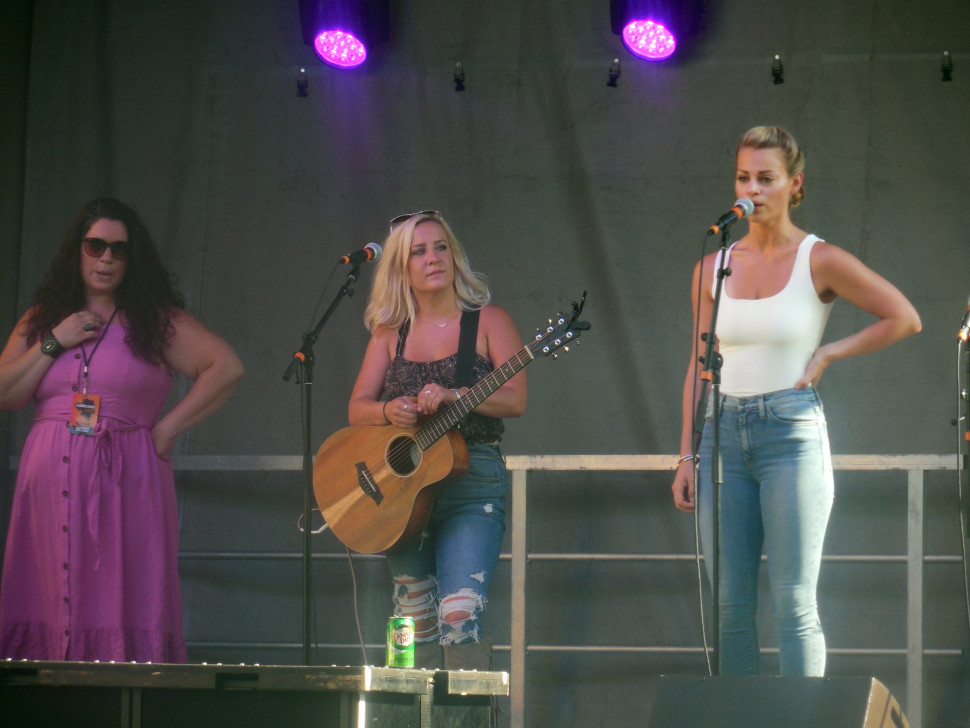 Cobblestone Live! Is Once Again the Place To Be In Buffalo

There’s something happening here and what it is should be clear to everyone who soaked up the vibe at Cobblestone Live! this past weekend. Downtown Buffalo has once again become a canvas worthy of painting artistic events on thanks in part to the organizers behind this two-day musical smorgasbord mastering the art of the urban festival experience. While a number of factors had to converge en route to bringing The Queen City back from the depths of industrial purgatory, everything from the dedication of the staff to the diversity of the performers was indicative of the overall rejuvenation of the community.

I arrived on the scene just as Buffalo’s Women of Country were igniting the Illinois St. stage, which definitively snuffed out any notion of this being a testosterone-laced “jam band” gathering. Jillian Eliza, Amanda Nagurney, Caitlin Koch, and Katie Mallaber-Prestia took turns baptizing the crowd in the resplendent sounds of yore – that is to say, a time when there was more coming out of Nashville than just inconsequential pop chatter with a Southern accent. Their individual strengths and collective harmonies were utilized to great effect throughout the set, but Mallaber-Prestia’s knockout interpretation of Lady Gaga’s “Million Reasons” was the moment when I knew that getting there early was the right move. Whether or not any of them become the next Kacey Musgraves is at the mercy of cosmic forces, because, from a purely vocal perspective, their ability can’t be denied.

Next, I decided to saunter over to Columbia St. to see what Tim Britt was all about, but not before stopping off at Fat Bob’s Smokehouse for a taste of what everyone in WNY has been raving about since Eve first took a bite of the forbidden fruit. Anyone attending music festivals regularly knows how the food can make or break your approach to the rest of the evening, so I was pleasantly surprised when my $7 pulled chicken sandwich with cornbread heartily carried me through until the outdoor stages began to settle down.

As for Britt, he and his band played to a modest yet enthusiastic crowd of wanderers who maintained just enough proximity to avoid missing the sparkling melodies emanating from the stage. Their cover of Fleetwood Mac’s “The Chain” was solid, but it was the verve of the original material that made me want to hear more from them in the future.

I stuck around Columbia St. to catch The Sadies, a Toronto-bred country/rock outfit led by brothers Dallas and Travis Good. If you were a fan of crushing guitars with a robust rockabilly twinge, this was the place to be, as every song torpedoed into the next without skipping a beat. They were loud, focused, and determined to deliver the finest set of the daylight hours.

Never was the variety of styles more pronounced than when I made my way back to Illinois St. to find TAUK in the middle of eviscerating people’s inhibitions with a dizzying display of rock, funk, jazz, prog, and whatever else they felt like pulling out of the trunk.

Guitarist Matt Jalbert, bassist Charlie Dolan, keyboardist Alric Carter, and drummer Isaac Teel are ridiculously gifted players whose onstage chemistry conjured up one of the most life-affirming festival vibrations I’ve ever been a part of. They turned “Black Hole Sun” into a sultry instrumental slow-jam and concluded their time not with a song so much as an explosion of epically musical proportions.

Homegrown sensations Aqueous closed down the outdoor celebration Friday with an extended headlining set due to Canadian alt-rock heroes Sloan being turned away by the border patrol earlier in the day. Their infectious energy, combustible jams, and occasional forays into danceable prog-pop were all sonically superior to what they did last year, which, if you recall that night, was no small feat.

Michael Lang has spent the last 50 years trying to bring people back to the garden, but little does he know that the brains behind Cobblestone Live! have been able to accomplish just that in less than three. They may not be able to accommodate half a million strong, but the egalitarian atmosphere presented is as close to the original Woodstock as you’ll get in 2019.