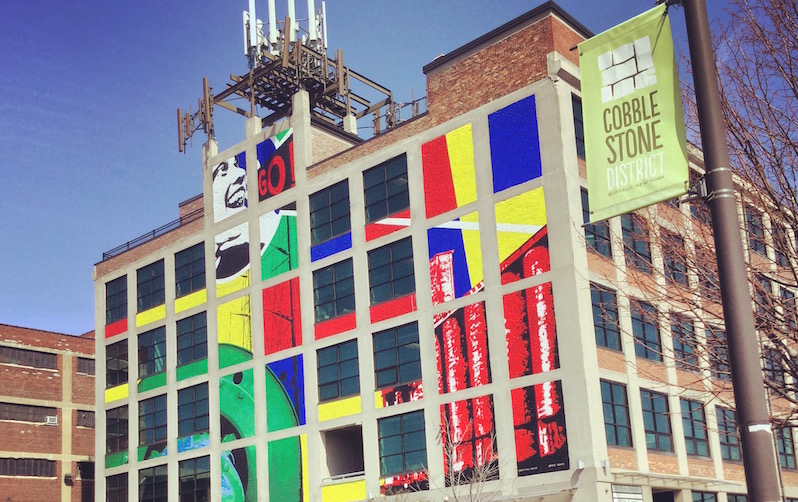 Driving through Buffalo, you will notice the skyline rising and buildings expanding – and the Historic Cobblestone District mimics the same state.

As you enter the historic entertainment district, you’ll be pleased to witness steel structures rising above the incumbent buildings which call the Historic Cobblestone District Home. Throughout the day, the sound of rumbling industrial machinery confirm new buildings are being brought to life.

Abandoned for decades, the freight house fell into a state of disrepair that made its safe rehabilitation impossible.

$18 million later, ‘contemporary living at 1 south street’ has begun to take center stage as the exterior structure overlooks the Buffalo River. Like many buildings in the Historic Cobblestone District, Buffalo River Landing will pay homage to the historical significance of the area. As part of the plans, the freight house’s brick foundation will remain and be visible from the water’s edge.

The luxury apartments boasts living arrangements from 900-square feet to 1,800-square feet and a priceless view of an area that the queen city was built upon more than 150 years ago. The mixed-use building will also offer professional space for commercial tenants. The apartments are projected to open by the end of 2016.

Located in the Historic Cobblestone District, Seneca Buffalo Creek Casino continues to experience growth on a number of fronts.

First, business is booming for the Cobblestone District neighbor as locals and visitors alike make the most of the Buffalo Renaissance. As a result of the strong financial state the Seneca Buffalo Creek Casino is currently in, a $40 million expansion is currently underway just three years after the casino’s opening.

The expansion to the casino welcomes two floors of additional space that will increase the casino’s facility by more than 50,000 square feet. The new space will house more than 300 additional slot machines, entertainment space, new Western Door restaurant, and an expansion of the Buffalo Savors Bar & Grill.

The final steel beam was set in the beginning of May and the expanded portion of the casino is slated to open spring 2017.

It was also recently reported that Pegula Sports and Entertainment have reach an agreement to purchase the historic building located at 79 Perry Street in the Cobblestone District, which hints to further development in the coming months.