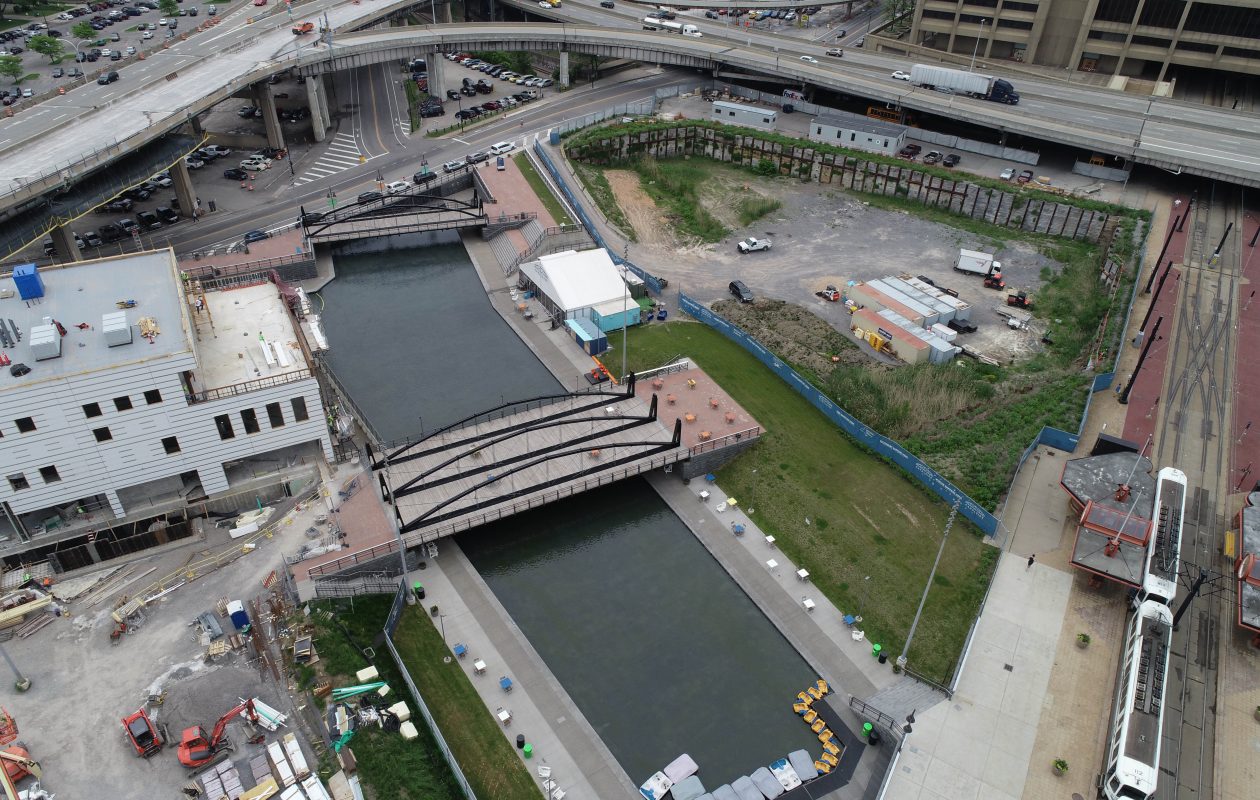 Originally Published in The Buffalo News
August 28, 2019
By Mark Sommer

There has been talk for years of creating a vibrant mix of residences, restaurants and shops in an unused part of Canalside where a portion of Memorial Auditorium once stood.

On Wednesday, the public will get its first look at design concepts for the 2-acre site.

Three designs for what’s come to be known as the North Aud Block will be presented at 5:30 p.m. Wednesday. The 30-minute presentation by Erie Canal Harbor Development Corp. and lead consultant T.Y. Lin International Group will occur during a two-hour open house from 5 to 7 p.m. in the Honda Pavilion tent at Canalside.

“This is now that planning step so we can get to construction and the development we all envision,” said Steven Ranalli, president of Erie Canal Harbor Development Corp.

“But we are absolutely at an early stage, and hope people will come out and participate in the meeting,” Ranalli said. “We want to hear from the general public about what their expectations are before we make any decisions.”

The process was triggered by Gov. Andrew M. Cuomo’s announcement a year ago this month to spend $10 million on infrastructure. He said he wanted to jump-start private development in an area that for years has been a large hole in the ground.

The site is bounded by Lower Terrace to the north, Main Street to the east, the canals to the south and Commercial and Pearl streets to the west.

“We started with the historic street grid and historic building outline, and looked at what that would get us and how that would work,” Ranalli said. “Then we moved on from there because of issues such as wind and noise, density of development necessary to be financially successful and then to connectivity and where the streets take you,” he said.

Here are the options:

This design was the starting point. It reestablishes the site’s historic street grid and building pattern.

Pearl, Commercial and Lloyd streets are aligned with buildings three to five stories in height, as they were during the Erie Canal’s heyday in the mid- to late-19th century. The space calls for 100,000 square feet of commercial development, with residences above the ground floor totaling 83,000 square feet. The plan also calls for one level of underground parking with 140 spaces.

Ranalli said this option has the least amount of density, with just one to two levels of residential spaces. Wind blowing through the wide open streets, and the lack of a building buffer to minimize noise from the Niagara Thruway were also concerns.

“That’s the basic layout formed around history, and the starting point for us,” Ranalli said. “It can be somewhat limiting in terms of the overall development, and is a small program for building a strong vibrant neighborhood in a site of two acres.”

Another concern, Ranalli said, was that Commercial and Pearl streets in this scenario lead to the underbelly of the highway, with Lloyd Street ending at Main Street.

“All of these things together caused the design team to look inward a little more for Option 2,” Ranalli said.

“We went a little bit taller by blocking the noise out of Canalside and by turning the site around in a U-shape, forming what is ultimately a public square that helps break up the wind and makes more intuitive, usable space.”

Option 2 offers less use of the historic streets and higher levels of building density and parking.

The proposal offers a slight increase of 115,000 square feet of commercial space, but the 151,000 square feet of residential space called for is nearly twice as much as the first option. Underground parking is boosted to 300 spaces on two levels.

The height of buildings also doubles, reaching 10 stories with the tallest structures closest to the highway before terracing downward. They are intended to buffer noise from the highway while boosting the number of residents.

The area is activated at ground level on all sides, with public space opening more to the canal side. The design is better orientated to the sun, and provides protections against inclement weather.

A covered pedestrian connection to Pearl Street and one-to-two story buildings along the canal are also part of the plan.

Option 3 calls for the largest build-out. There is 275,000 square feet of housing, four to five levels of parking providing 550 spaces and buildings up to 15 stories tall closest to the thruway. Commercial space is slightly less than the other two options.

The design, similar to Option 2, also blocks highway noise, protects against weather and provides good sun orientation.  It also creates an internal public gathering space and has a more efficient parking layout through an entrance on Lower Terrace.

The enlarged parking ramp includes above-ground spaces fronted by commercial spaces to hide them, with the possible exception facing the Thruway, Ranalli said.

The increase in parking would be not only for the North Aud Block, but also for two mixed-use buildings due to be completed in the next two years near the new children’s museum by developer Nick Sinatra, and another by Benderson Development.

Planning for the project also comes at a time when One Seneca, just north of Canalside, is being transformed by developer Douglas Jemal and the Cars on Main Street program is being extended to Canalside.

The move to create a dense, livable neighborhood is an attempt to recreate the kind of compact living spaces that once were there.

“Buildings back then would be 15 to 20 feet wide for shops,” Ranalli said. “That doesn’t work in today’s retail environment, but you can imagine the sheer number of businesses and individuals living in spaces that small.

“I don’t think we will hit that same density, even when you see some of these larger-scale options,” Ranalli added. “But we’re trying to build a waterfront neighborhood for the 21st century, and we definitely need that mix of commercial, retail and residential.”

The different designs people will consider Wednesday are intended to help decide the right mix of density, building height, parking, public space and adherence to history.

“We want to move quickly on this, but we want to do it smart and make sure we have a great plan that can stand the test of time,” Ranalli said.