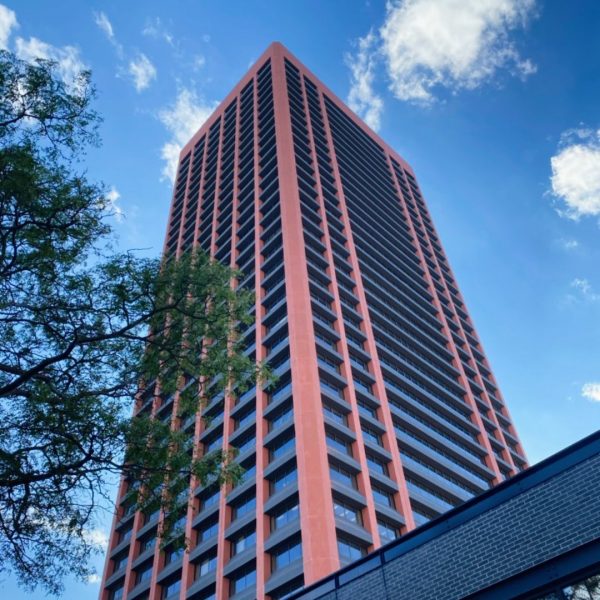 Development Update on Seneca One

Since its opening, the mission of Seneca One has remained the same: to play a major role in finally connecting Main Street to Canalside to help reestablish our community as a waterfront city and deserving destination. Occupying over 1.4 million square feet in downtown Buffalo, their footprint is peppered with restaurants, retailers, residences, and businesses – all paired with an unmatched view and an overall buzzing atmosphere. With over 100 apartments at the base of the building, thousands of people working in the tower, and eateries that serve late into the evening, the team has promised that Buffalo will never see Seneca One tower fall asleep again.

Director of business development at Seneca One, Sean Heidinger shares how Seneca One has become so much more of a cultural and community hub in recent years. From community events to the overarching vibe at Seneca One, this spot is a place for anyone and everyone regardless of background.

“If you’re going to Canalside, you can pop into the lobby bar and grab a drink and then go to Canalside. Or if you are heading down to the Sabres game or anywhere downtown, you can slide through Seneca One and get a drink and check out public art or a yoga class, grab a ready bike or even enjoy the gardens. Now it’s really a space for everybody.”

Apart from just the community aspects of Seneca One, the building is also our city’s hub for tech and startup companies, a growing development in the Queen City. Based on a study done by a  New Hampshire-based startup strategic growth and investment firm, Buffalo was named one of the fastest-growing startup cities in the United States, show proof that these investments made to the city are spurring on a variety of growth for our city and the development done at Seneca One has everything to do with it. With the building holding 43North, an accelerator that hosts an annual startup competition investing $5M per year to attract and retain high-growth companies in Buffalo, the M&T Tech Hub, the eastern U.S. Hub for the unicorn company, Odoo, and a multitude of other start-up companies, Seneca One has aided in changing the scope of the city for the better.

“When 43 north came into the building and announced that their tech hub was going to be here a lot of people thought that perhaps they would operate in different silos and not interact. But what we’re seeing is these communities really coming together. For example, the giant that is M&T Bank is really getting their hands dirty with the startups that are fighting day in and day out. It’s everybody on the same level in this building and they’re all willing to help each other. The best news ever is when you hear a company that needs more space because they’ve already outgrown the space that they leased, and we’ve heard that a number of times already, even during the pandemic.”

With this kind of momentum, there is no end in sight for the team at Seneca One, instead we can expect to see even more growth in the coming months.

“You can expect more exciting announcements regarding tech companies in the building or coming to the building. You can also expect us to announce some very exciting programming for the summer. So, absolutely taking advantage of all our outdoor Plaza space and our gardens and our beer garden and turning it around and creating a real live music destination in downtown Buffalo. We’re going to be working with not-for-profits and different arts groups and collaboratives as a destination for free family, friendly fun, live entertainment, and gatherings. We’re also working to take what we do to other places. We’re going to take programming to Bidwell Park, and even the Richardson complex.”

Stay tuned to hear some exciting announcements from the team at Seneca One, and in the meantime make this spot your first stop on your next endeavor downtown. For a list of current programming visit, senecaonebuffalo.com