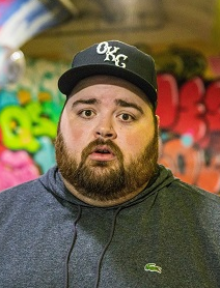 Justin Smith is a NYC-based comedian from Oklahoma City, Oklahoma. On paper, Justin is the definition of an Oklahoma stereotype. He was raised in a religious household, went to a conservative Christian college, worked in the oilfield, loves BBQ and the phrase “fixen to.” However, it doesn’t take long after meeting Justin to realize that he is farthest thing from a stereotype. He is quick-witted, brutally honest, and incredibly engaging, which is the main reason his resume is so diverse. His credits range from making fun of high school proms on MTV to talking about the intricate details of comedy on PBS, to performing at the world famous Apollo Theater in Harlem. That’s all not to mention that he has participated in the notorious Hell Yes Fest in New Orleans and has performed at the underground comedy fest and the district of comedy festival at Kennedy Center in D.C. Justin has no limits.

Justin currently resides in NYC where he lives in a Hispanic neighborhood, rides crowded trains everyday, and performs nightly all over the city. And he’s loving every second of it.