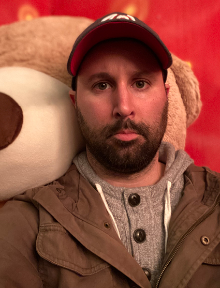 Matt Bergman realized his love for comedy in his last year of college where he was pursuing a degree in criminal justice. After graduating he realized he was afraid of criminals and decided stand-up comedy was the way to go.

It was a wise move. Bergman is easily relatable and versatile, a skill set that has opened the door to TV appearances on “Gotham Comedy Live,” Comedy Central Live, and a Dry Bar Comedy Special.

His recent album, “Approbation Constante,” was called “really tough to purchase” by his mother who still doesn’t understand how iTunes works. It was recently re-released on Helium Records and can be heard on Sirius/XM.

In addition to the two-item minimum, there will be an 18% administrative fee in the showroom.

With ever-changing guidelines and mandates, please refer to the local government agencies for the most up-to-date information. Customers are expected to take necessary precautions to protect themselves and others.

This show is 18+. Please note, there is a 2 item per person minimum in the showroom. Tickets will be available for pick up at the box office 45 minutes prior to the show.