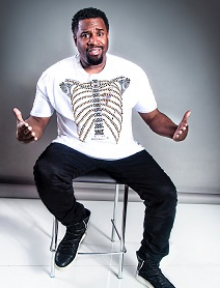 Corey Holcomb got his start in the world of stand-up comedy by working the open mic circuit in the hotbed of Chicago. In the years since, the self-proclaimed “ghetto Dr. Phil” has become a national sensation, and has appeared on NBC’s “Last Comic Standing” and MTV’s “Wild ‘N Out.” Holcomb has also been featured in the films “Think Like a Man Too” and “The Wedding Ringer.”