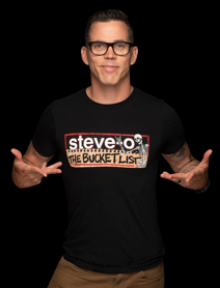 Steve-O (a.k.a. Stephen Glover) is a household name and it all started when he began producing homemade videos of dangerous stunts mixed with comical behavior. Steve-O graduated from Ringling Bros. and Barnum & Bailey Clown College in 1997, and had a career as a circus clown before achieving fame on Jackass and Wildboyz. Since then, he has become a New York Times bestselling author, standup comedian, and actor. His first hour-long comedy special recently premiered on Showtime and performed in the top one percent of all Showtime comedy specials.

A word from Steve-O: “You understand and acknowledge that this show contains graphic and crude sexual humor and adult language, including but not limited to graphic depictions of human anatomy, which some attendees may consider profane, vulgar, offensive and/or otherwise objectionable. By using this ticket or attending, observing or participating in this show, you hereby release, forever discharge, and covenant not to sue any person or entity connected in any way with this show, and you hereby waive any legal or equitable rights or remedies you have or may have arising from the content and material in the show.”