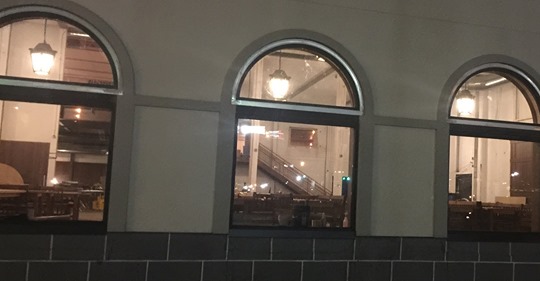 Hang On, Buffalo, Hofbrauhaus Will Get Here When it Gets Here

Originally Published in The Buffalo News
By Andrew Galarneau
January 20, 2020

Is there something about Buffalo that makes people feel left out?

More than most places, I mean?

There is a term, FOMO, which stands for “fear of missing out.” It’s the name for the dread you experience when flipping though your phone and finding evidence you might not be doing the hot new thing.

Here’s why I ask: Every night, on my way home from the office, I pass by the former Bison chip dip factory on Scott Street. It’s supposed to become a restaurant called Hofbrauhaus Buffalo.

First announced six years ago, the restaurant would be the ninth installment of the Munich-beer-hall-inspired franchise. A proclaimed August debut for Hofbrauhaus came and went without opening or explanation. People ask me about the project more than any restaurant during my tenure, by far.

Talk about suspense? Kevin Townsell, who owned the Shannon Pub, has been trying to get the restaurant off the ground since 2012, so imagine how he feels.

The longest-gestating restaurant in recent Buffalo history has created a sort of Bermuda Triangle fascination in people as it inches toward the point of pouring. The theories most frequently advanced to me would do well as plots for direct-to-cable thrillers, because no one wants to talk about the usual suspects, like financing being rethought or disagreements among major partners.

The other night, for the first time, I noticed the boards were off windows beaming with light. A glimpse inside showed furniture, including the sort of stout tables one might stand on while hoisting a liter of lager and singing drinking songs.

I snapped a photo and posted it to social media:

Because at this point, getting a liter of Hofbrauhaus Marzen and a pork knuckle would feel a little like winning a silver ticket, anyway.

The reaction to the picture was immediate and massive. More than 4,000 Twitter users clicked on the photo. Demands came for more information I didn’t have, like the slightest glimmer of an opening date.

Then came the question, from Germany, Florida, Las Vegas: What is it with you people? It’s a chain restaurant.

I felt obliged to explain.

Despite its support of local restaurants, Buffalo has a serious case of chain restaurant FOMO.

Remember the opening of Krispy Kreme doughnuts? The franchise is gone now, but traffic backed up onto Sheridan Drive.

Sonic, Popeyes, Chick-fil-A. In Buffalo, orange cones and traffic police are the traditional accompaniment to a chain rollout.

Hofbrauhaus doesn’t have a nationwide television advertising campaign. It comes by its Buffalo audience the old-fashioned way: hunger. The city that made kummelweck famous now lacks a single German restaurant.

So that needs to change. When? As soon as I know, you will, too.

In the meantime, take a deep breath.

As a registered independent, I don’t go to the polls as often as Republicans and Democrats. Every two years, for the general election, I’ve climbed the stairs to the Williamsville Village Hall.

In November 2016, after I offered my name, a poll worker took the chance to ask me a question that had been burning in their mind: “When is that Hofbrauhaus going to open?”

Two years later, I arrived on Election Day, to do my duty as a citizen, and responded to the traditional question: “When is Hofbrauhaus going to open?”