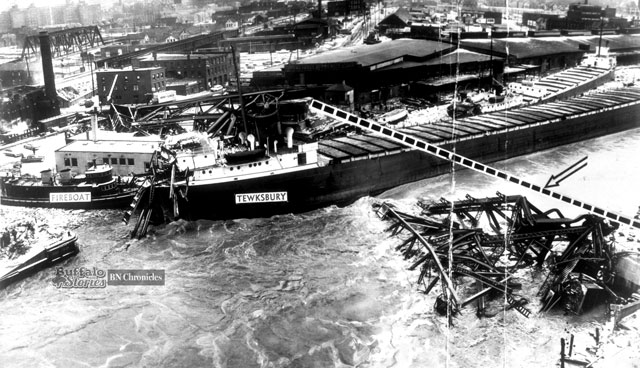 On January 21, 1959, the Michigan Avenue Bridge collapsed in what is often referred to as “the Tewksbury Disaster.”  That winter was very cold, with heavy snow and bitter temperatures.  On January 21st, there was an unseasonable thaw.  The 50 degree day combined with a wind storm broke up the sheet of ice along Cazenovia Creek around 6pm, pushing the ice from the creek into the Buffalo River. The ice jam ran up against the hull of the MacGilvray Shiras, owned by the Kinsman Transit Company in Cleveland.  The Shiras was moored for the winter at Concrete Central Elevator and full of corn.  The Shiras broke free from its mooring around 10:40pm during wind gusts of 48 miles per hour. A  chain-reaction accidental crash when the steamer Shiras broke loose from a dock owned by Continental Grain Company.  The Shiras floated down river, where it struck the steamer Michael K. Tewksbury, which was stationed for the winter at the Standard Elevator and full of wheat.  The boats continued downriver, past the Ohio Street lift bridge which was under construction and out of service.  The story goes that the bridge operators for the Michigan Ave bridge were drinking at the Swannie House and not manning the bridge. Approximate path of the MacGilvray Shiras on January 21, 1959

A call came in at 11:10pm from the watchmen at Standard Elevator alerting the bridge that there was a loose boat coming their way.   It was said an earlier call came in at 10:45pm but the operators were waiting for Mr. Mack and Mr. Szumlnski because they did not know how to raise the bridge.  Mr. Szumlinski recollected to the Buffalo News in 1969, “I saw the boat about 1000 yards away.  It looked like a phantom coming out of the night – no lights, no flares”.  The efforts to raise the bridge came too late, they were only able to partially raise the bridge before they needed to abandon the bridge.  Two of the bridge tenders were injured as the boats slammed into the Michigan 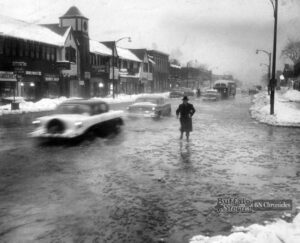 The ice jam created by the ships blocking the river caused intense flooding in the First Ward. The quick thaw and the rain that occurred caused one of  the worst flooding events in Metropolitan Buffalo History.  There was also major flooding that night in Tonawanda and Amherst along Ellicott Creek.  Delaware Park lake (now Hoyt Lake) rose several feet, closing Delaware Avenue.  The New York Central Railroad tracks between Forest and West Delevan were washed out from flooding on Scajaquada Creek.  Smokes Creek flooded an area 2 square miles in size, causing a state of emergency to be declared for Lackawanna.

At 7:45am the next morning, the north tower of the Michigan Avenue bridge toppled, crushing the roof of the Connelly Bros building and kicking out the sidewall timbers of the Engine 20 (the fireboat) firehouse.

With the Michigan Avenue bridge wrecked and the Ohio Street bridge closed for repairs, the Skyway was the only way to access South Buffalo from Downtown.  The trucks hauled the grain from the wreck site over the Skyway to Connecting Terminal, an 8-mile trip.  A channel was finally cleared on February 3rd preventing the risk of the River flooding again.  The Shiras was damaged and on February 12 was towed to the GLF elevators to be unloaded and then taken to the American Shipbuilding dry dock for repairs.  The Shiras ended up being towed to Hamilton, Ontario and sold for scrap in June 1959.  The Tewksbury continued operations, returning to winter in Buffalo in following years.  In 1962, the Tewksbury was renamed, but the ship saw service until 1975. The Michigan Avenue bridge reopened December 7, 1960.