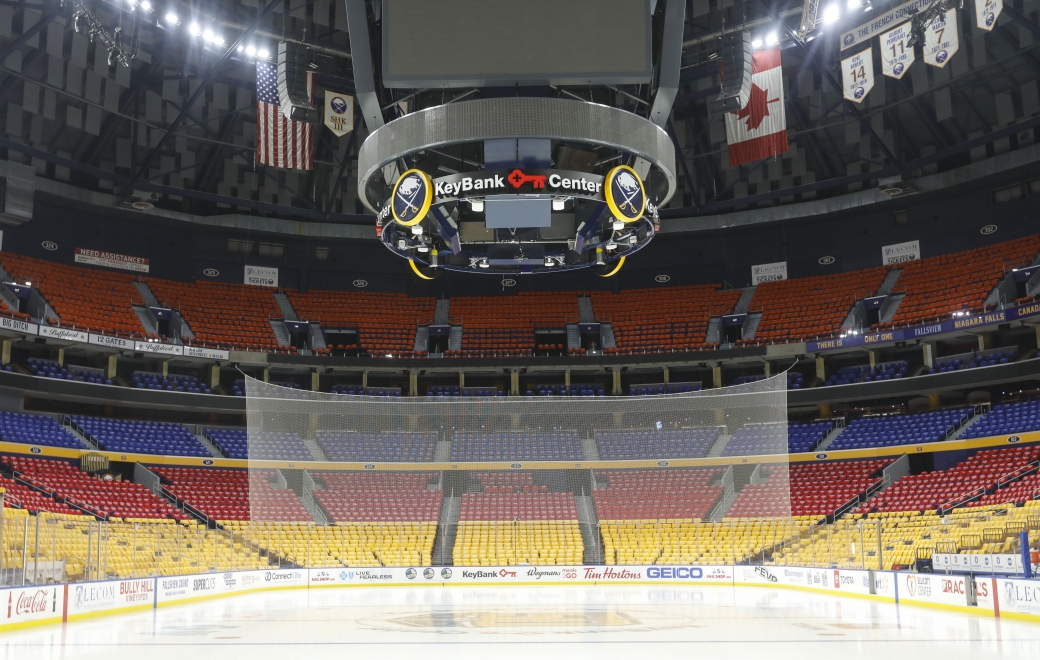 Originally Published in The Buffalo News
December 11, 2019
By Mike Harrington

There was quite a surprise in KeyBank Center when the Buffalo Sabres hit the ice for practice at the noon hour Wednesday.

The seats were actually covered by T-shirts of the corresponding color for Thursday’s ’80s Night game against the Nashville Predators. In addition to paying tribute to the team’s second decade, the game will also be a celebration of the Aud, the Sabres’ home from their birth in 1970 through 1996.

The team will be introducing ’80s alumni in a pregame ceremony, using ’80s themed music and graphics and including several other special touches for the game.

After practice, coach Ralph Krueger gathered his players on the ice for their daily post-practice chat and reporters watching could hear the word “Aud” used. Assistant coach Steve Smith, who played in the building with Edmonton, was chiming in.

“I was checking if there was anybody else that had the same level of lack of information I had,” said a smiling Krueger, who never saw a game in the franchise’s former home. ” ‘Smitty’ filled in the boys that he played here.

“Now I’ve done my research and I’m up to speed. Didn’t get any heads up on that. Now I’ve seen it, saw the colors, it must have been a passionate building for the Sabres to play in. I’m sure it will bring back a lot of memories and should add a spark to the game against Nashville for sure.”

Captain Jack Eichel said assistant equipment manager and Williamsville native George Babcock was filling the players in about the Aud and the seating arrangement.

“That would have been something to look at back at in the day,” added winger Kyle Okposo. “Now I’m intrigued and I’m going to go look up some pictures later for sure. ‘Smitty’ said it was a small rink with the crowd right on top of you so that’s pretty cool.”

Peterson, acquired with Foligno as part of the 1981 trade with Detroit for Jim Schoenfeld and Danny Gare, has been with the Predators since their birth in 1998 as an assistant coach, broadcaster and ambassador.

#Sabres emerging for practice and look at the Aud Night prep! Colored T-shirts to rep the old seats. Beautiful. pic.twitter.com/qlugF25yG1

Defenseman Rasmus Dahlin, who has missed the last eight games with a concussion, took regular turns at defense alongside Colin Miller and was at his quarterback slot on the No. 1 power play at practice Wednesday. The Sabres will wait until Thursday morning before deciding if Dahlin can return.

“There’s definitely a step in the right direction,” Krueger said. “We’re just going to assess him and wanted to see him in his customary role and see how he looks. So it was an opportunity to take a look at him, and we’ll make that call.”

The workout was Dahlin’s first real contact since the injury so the Sabres are obviously going to be cautious with him.

“He looked quite strong there, so it’s trending in that direction,” Krueger said of a return. “Let’s not assume anything, because it was the first time he was in battles and contact. But he’s moving in the right direction, for sure.”

We’re going to see what this means for Dahlin. He’s paired with Miller and back on the No. 1 PP. That could, in fact, be a sign he’s in tomorrow.
It’s Montour-Ristolainen, Dahlin-Miller, Scandella-Bogosian, McCabe-Jokiharju #Sabres

Because it’s a decade night, the Sabres will be wearing their white 50th anniversary jerseys and white gloves. Buffalo is 3-1 wearing the jerseys so far and the three victories have all included a lot of offense (wins over New Jersey by scores of 7-2 and 7-1, and a 6-4 victory over Toronto). The lone loss was the 1-0 shutout defeat Nov. 2 to the New York Islanders.

“I love them. I think it’s great. Guys enjoy wearing them,” Eichel said. “It’s something different, keeps things fresh and you know it’s a more special night with more added to it for the fans. We’ve had pretty good success for the most part wearing them, too. That’s a trend we want to keep going.”

The Sabres will wear the 50th sweaters eight more times this season, next for the Dec. 27 visit by Boston.

Buffalo a second home for Preds

The Predators hit town on an eight-game winning streak in Buffalo. They have not lost here since the Sabres posted an 8-4 win on Feb. 27, 2008. But strangely enough, Buffalo has had excellent success in Nashville with a 6-3 record in its last nine games in Bridgestone Arena.

The Predators earned the 800th regular season win in franchise history with Tuesday’s 3-1 victory over San Jose. At 14-10-5, they are tied with Minnesota for fifth in the Central Division and are one point behind Vancouver in the Western Conference wild-card race.

Defenseman and captain Roman Josi leads the Preds with 26 points. Center Nick Bonino, whose two Stanley Cup victories for Pittsburgh included the 2017 final over the Preds, is the leading goal scorer with 12.