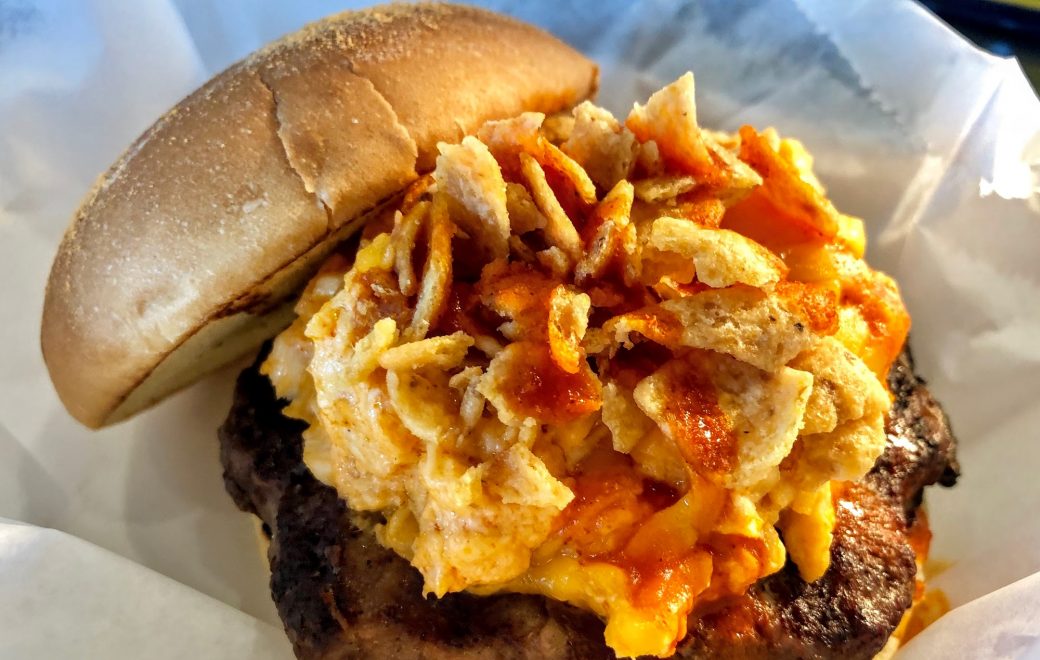 Originally Published in The Buffalo News
October 2, 2019
By Ben Tsujimoto

The Buffalo Sabres’ unveiling of new concessions on Monday involved more than the annual over-the-top list of deep-fried comfort foods.

Not that there’s anything too wrong with the occasional fatty stadium treat, because that’s what some local hockey fans look forward to with excitement. But there’s more than that this season with new items in the general concessions, a new grab-and-go Market on Perry and Buffalocal beers.

For the general concessions, the usual array of eye-catching burgers and hot dogs was detailed, with five items sticking out. Concessions will be available each home game until the 10-minute mark of the third period)

• Chicken wing dip burger: A 1/3-pound burger topped with wing dip and corn chips, finished with Red Hot jus and served on a brioche roll. It was better than I expected, but I’m a sucker for brioche and different textures.

• Smoke and whiskey hot dog: Beef hot dog topped with black bean corn relish, smoked jalapeno cream cheese and finished with a whiskey barbecue sauce. These are unusual flavors that work well in concert, even if it’s a little difficult to eat cleanly. Think more zesty than spicy with this dog.

• Salsarita’s: Loaded nachos, queso and chips, or a standard burrito. Buffalonians get into heated arguments about Tex-Mex chains, with Chipotle, Salsarita’s and Moe’s all in the discussion. For Salsarita’s die-hards, these will be welcome additions.

• Bakery 55’s warm cinnamon rolls: You might wince at the cost, but these behemoths do not disappoint. Bakery 55 sits in the back of Labatt House, just east of the arena, and it makes these delightful cinnamon rolls daily.

With grab-and-go markets thriving at sporting events across the country, the creation of the Market on Perry might trump the new Delaware North items.

Executive chef Stephen Forman noted the success of last year’s grab-and-go market on the 100 level, not far from the escalators to the left of the KeyBank Center’s main entrance, which stocked drinks, snacks and luxury items such as Wegmans sushi.

The 2019-20 addition is called the Market on Perry, located on the 100 level (roughly Section 106), that will feature three hot grab-and-go items, two of which will rotate monthly. The chef at the stand will work slightly ahead of demand, not quite making items to order but preparing a few in advance, keeping them under the warmer for efficient service. Prices will range from $8 to $14.

“The biggest challenge at any stadium or arena is called through-put, or getting the guest through our stand, back to their seat as fast as possible,” Forman said. “That’s one of [fans’] biggest complaints – ‘I waited in line at the concession stand for so long, the game is going on and I’m missing the action … ‘ ”

Forman is still considering a staple: his present ideas are either a jumbo Slime Dog (a Texas hot dog) or a royale hoagie (Italian sausage, capicola, ham topped with banana peppers, onions and lots of melted provolone). The other end of the new market will include a horseshoe-shaped bar for more convenient beer orders.

For craft beer fans, the expansion of the arena’s partnership with Buffalocal, the new marketing arm of Try-It Distributing, will increase the selection, almost exclusively with cans. There will be two Buffalocal stands spaced out throughout KeyBank Center, as well as service of these beers at a 200 level lounge open to general ticket holders.