MercyMe and Crowder Share the Glory With Fans at KeyBank Center 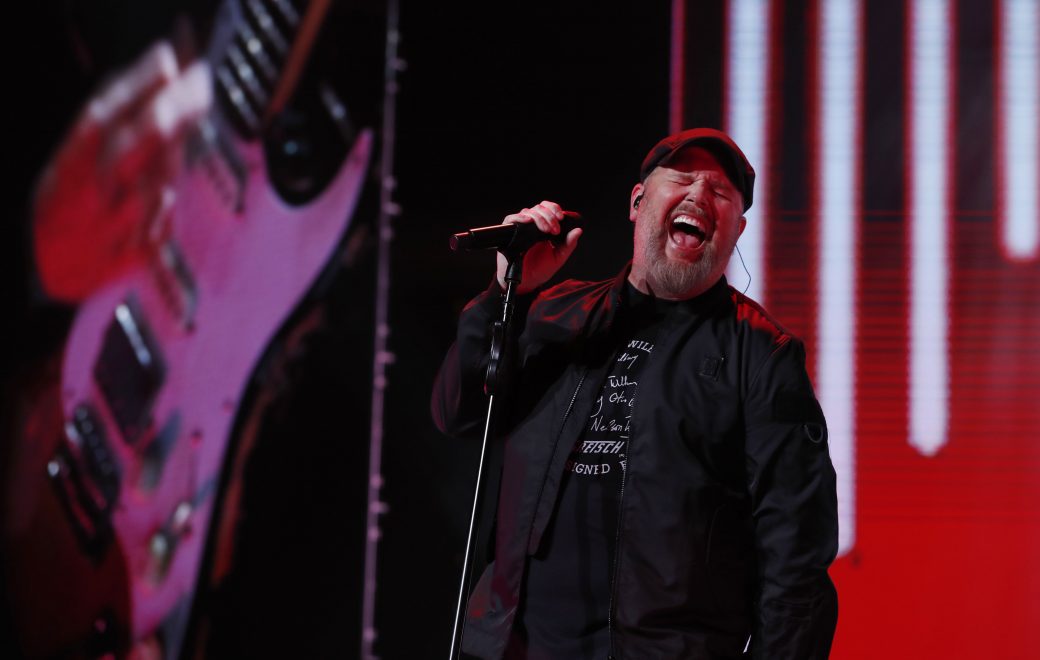 Originally Published in The Buffalo News
October 4, 2019
By Melinda Miller

After two excellent opening acts had their say and the audience was settled back in their seats at KeyBank Center Thursday night, the arena began to fill with a semi-celestial sound seemingly coming from a tunnel far away or high above.

But Bart Millard and the rest of the guys who make up MercyMe didn’t descend from the rafters or on angel’s wings. They just walked out from the back of the stage and went straight into “Best News Ever,” one of their many, many Top Ten Christian radio hits — and one of the easiest to sing along to. The fans obliged with that, and off everyone went, joined together on a spirited tour through the band’s grace-based catalog.

The entrance reflected in part what makes MercyMe so popular. In music and demeanor, the musicians keep themselves grounded, walking the walk alongside their listeners rather than assigning themselves any higher status. Self-deprecating jokes were peppered among some of the lyrics projected on a well-conceived digital backdrop, including one saying it felt like they had sung that particular song a billion times, because they had to sing it “Every. Single. Night.”

It was clear the musicians were having a good time on stage, and Millard explained that it was because they took the summer off to be with their families, enjoying their longest break in forever (they’ve been together 25 years). “We loved being off,” Millard said, “so …. just be glad we showed up!”

And they showed up in a big way. Song after song showed off their tight musical chops and their personal theology of God’s unconditional love. Part way through, they closed ranks and turned off the backdrop to perform more intimate versions of earlier hits, and that worked, too, including one lovely old-school moment with a soaring a cappella rendition of “Because He Lives.”

The band also debuted its new single, “Almost Home,” from an as-yet unwritten album. If the crowd’s reaction was any measure, it might not need an album to wrap around itself. It was bought and paid for before the third chorus.

The biggest payoff was when the lights went down and came back up on “I Can Only Imagine,” the biggest hit in Christian contemporary rock, partly because it’s a beautiful song and partly because it inspired a popular movie of the same name starring Dennis Quaid. Everyone was singing this time, and kept on singing as the music slid into “Amazing Grace,” making one imagine that, 200 years hence, Millard’s song could still be as popular as that 200-year-old hymn.

The concert opened with a brief set by Micah Tyler, a Texas singer who could not have been happier to be there. He had an infectious enthusiasm for his music and for the upcoming acts. His rich tenor set the stage for the night with the country rock hymn “Never Been a Moment” and his biggest hit, “(I Wanna Be) Different,” a heartfelt song on any chart.

Next up was Crowder, fronted by the extraordinary and hirsute David Crowder. As the band moved from pounding rock to rap to Gospel ballads, with the audience often up and singing, there was a sense they could just keep going all night, were it not for that other band that was yet to come. Songs full of pain and songs of forgiveness all were delivered with outstanding musicianship, making it totally worth the price of the ticket to see this group live. “Come As You Are” never sounded better; the wail of “Let It Rain” embraced his Texarkana roots and a special treat was when he sat down at the keyboard for what he called “some church music,” with a rich Gospel sound.

And this might have been the only concert this year where Buffalonians would get to hear and sing-along to Hank Williams Sr.’s “I Saw the Light.”

Which, Thursday at KeyBank Center, they did.

With Crowder and Micah Tyler. Oct. 3 in KeyBank Center.