The plan, which waterfront officials must still approve, envisions a mix of restaurants, shops, and residential units on the roughly two-acre downtown site where Memorial Auditorium once stood. Renderings depict two bustling terraces at the current site of the winter ice-skating pavilion, with a series of low, corniced brick buildings and taller high-rises sitting behind them.

The proposal would, if implemented as planned, fill one of the few remaining holes in Buffalo’s downtown waterfront. It would also, state officials said, push Canalside far closer to the mixed-use, residential neighborhood its planners have long envisioned. 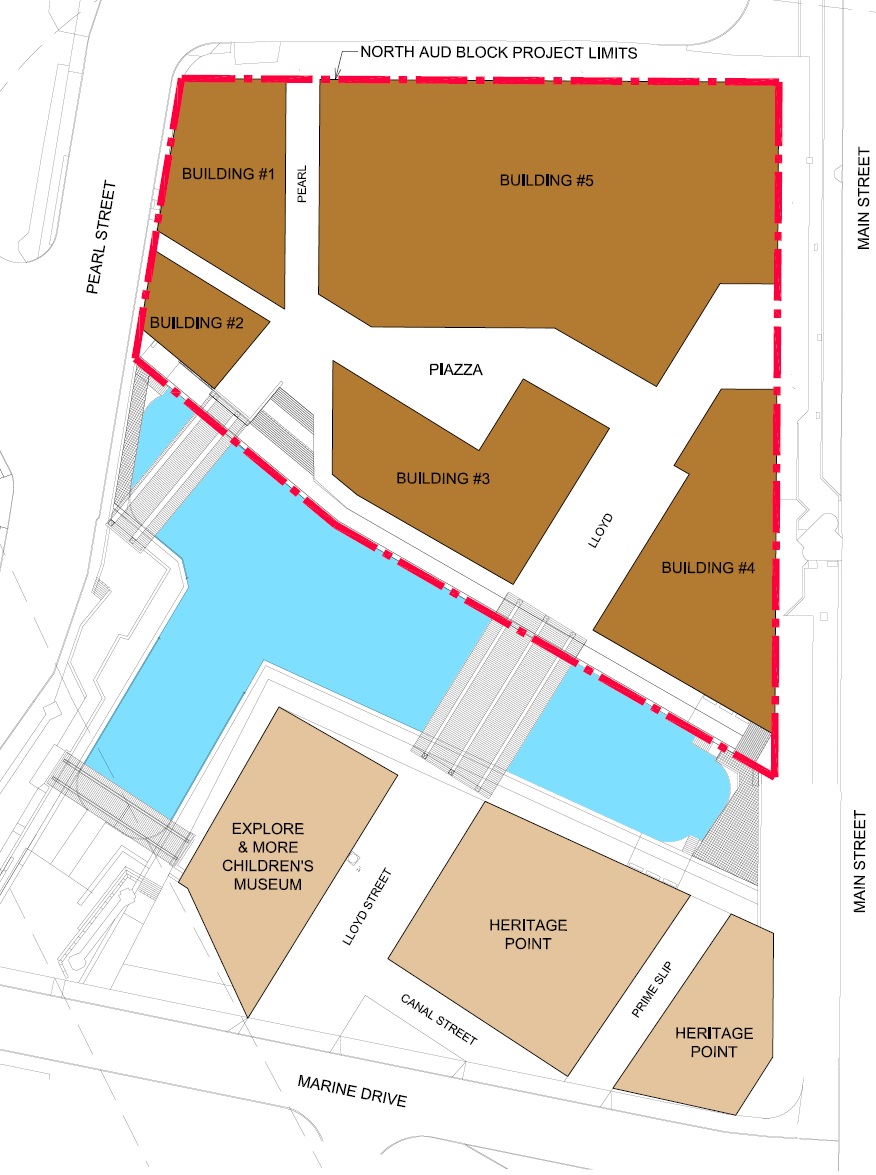 Developed by the engineering firm T.Y. Lin International, with input from two public hearings and a series of stakeholder consultations, the plan unveiled Monday builds off downtown’s historic street grid.

Plans call for a jagged asterisk of pedestrian footpaths, converging on a triangular plaza. Around that plaza, the plan calls for five new buildings containing up to 200 residential units, 140,000 square feet of commercial space and 300 parking spaces, half of them underground – though the exact designs of those buildings will be determined much later, after developers submit their own proposals.

The tallest building, slotted for the corner of Pearl Street and Lower Terrace, could reach as high as 13 stories tall, state officials said. That should help buffer noise from the 190, one of the main challenges architects identified to developing the site. Buildings will get smaller closer to the canal’s edge.

New York State has already promised $10 million for infrastructure planning and construction on the North Aud Block, the last undeveloped Canalside parcel that it owns. In a statement,  Cuomo called the plan a fusion of the “site’s historic past with a design for the 21st century,” adding that the “transformation” of the North Aud Block represents the next chapter of “the Buffalo success story.”

But that chapter will likely take years to finish, officials acknowledged. The Erie Canal Harbor Development Corp. hopes to begin soliciting private bids for the site in late 2020, after it conducts an environmental analysis and amends its Canalside project plans. From there, the agency will not only need to lure private developers – which has proved a challenge in the past – but also nail down the project’s specifics, including the exact number and type of both residential and commercial units.

Until then, state officials say, Canalside will continue to evolve. Three ongoing projects – the Buffalo Heritage Carousel, the Longshed building and the new Exchange Street Station – are scheduled to open this year on, or near, the waterfront. Sinatra & Company Real Estate is also expected to break ground on its $21-million Heritage Point project this year, adding two mixed-use buildings just south of the North Aud site. To the east, Benderson Development is expected to soon move forward with a five- or six-story new-build dubbed Two Canalside.

ECHDC, meanwhile, will hold a final public meeting to discuss the North Aud Block proposal on Jan. 22 from 5:30 to 7 p.m. The hearing will take place at the agency’s offices at 95 Perry St., Suite 500.