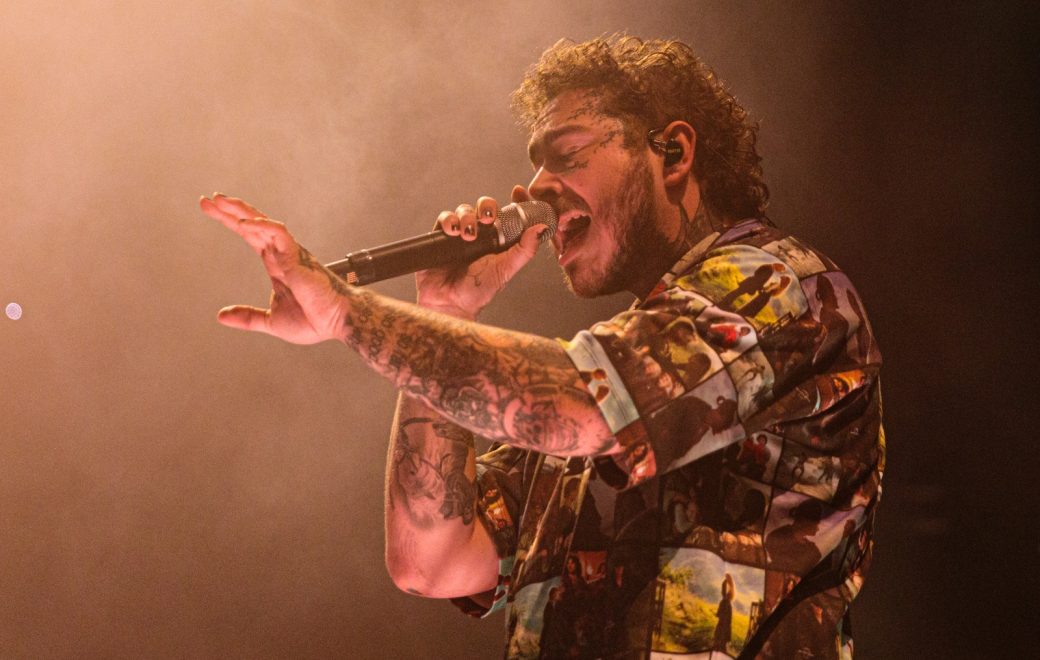 Originally Published in The Buffalo News
October 7, 2019
By Dan Almasi

Strutting about a runway stage in a picture-collage suit, the 24-year-old Grammy-nominated rapper-singer delivered a bombastic and entertaining performance. Posty, profusely thankful for the crowd’s fandom and presence, invited us to ride with him through the highs and lows of a 21-song, “Hollywood’s Bleeding”-heavy set.

And we did, through lamenting, heartfelt lows (“Fall Apart,” “Stay,” “Better Now”) and euphoric highs (“Rockstar,” “Sunflower,” “Candy Paint”) as pyrotechnics, laser lights and smoke pulsed out toward a sea of starry-sky-resembling cell phone lights.

The production, compared to other mega hip-hop spectacles, was fairly understated. No roller coasters a la Travis Scott or even backup singers or dancers. But that was OK with me, and perhaps even intentional. The Syracuse-native is all about the music and his message — “live your life; live your truth,” he preached. He also leaned hard into the “started from the bottom,” unlikely success story narrative, and spoke about his surreal rise to stardom between songs. The crowd ate it up — his seemingly genuine gratitude and slight goofiness make him easy to root for.

Above all, Post Malone — as a person and musician — is simply fun. With a unique, eclectic brand of rap, rock, R&B and hip-hop, Post strikes a mass-appeal chord by expertly mixing trap beats with catchy melodies. Malone’s humble-confident, self-aware swagger and eccentric authenticity — highlighted by his trademark face tattoos — make him infinitely likable. A woman sitting next to me described the rapper as “greasy” — a quality  she said she finds oddly attractive.

Highlighting the solid set was “Allergic” — a funky, as Malone put it, saccharine, change-of-pace pop bop, “Sunflower,” a lush, sparkly tune for which opener Swae Lee popped back out, and “Take What You Want,” a fervent, brooding digital duet featuring Ozzy Osbourne’s pre-recorded backing vocals and grizzled, gray-toned visage onscreen.

Having now seen two area Post Malone concerts — this one and the 2018 “Beerbongs & Bentleys” stop at Darien Lake — I can say Buffalo is deeply infatuated with Post Malone. A high-spirited, youthful crowd, many of whom were still riding the high of an earlier Bills win, jam-packed the arena for the weekend-closing mega show. The excited energy of starstruck teens and 20-somethings pulsed palpably throughout the halls and aisles of the downtown arena and continued as the crowd poured into the streets following a set-closing, college-party-anthem “Congratulations.”