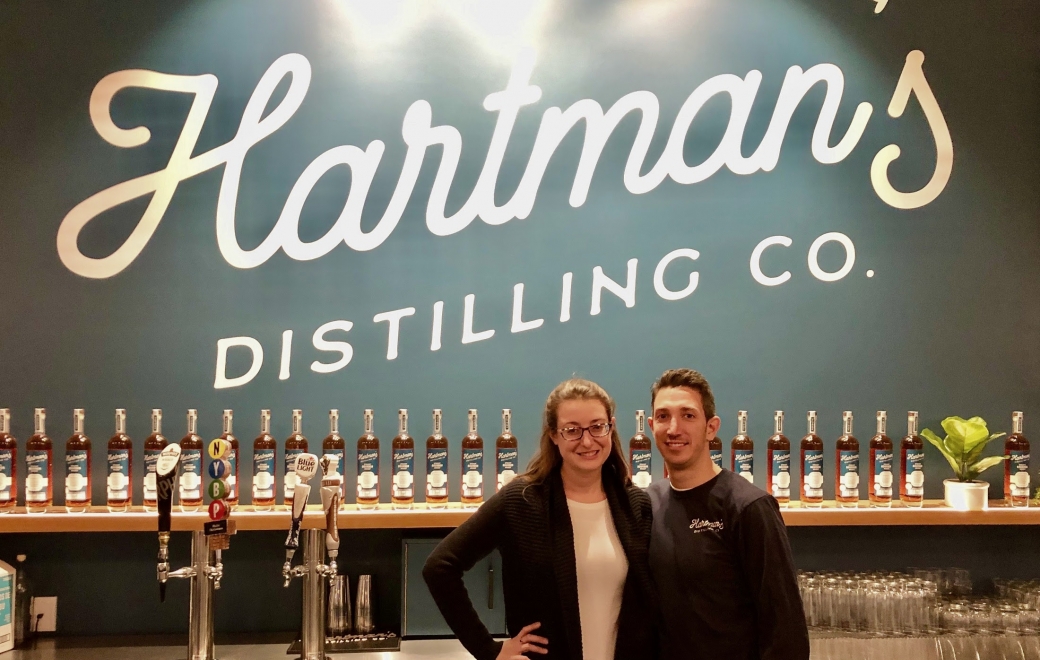 Originally Published in The Buffalo News
December 13, 2019
By Ben Tsujimoto

Justin and Jen Hartman had long planned to move back to Buffalo from Manhattan, where Justin worked for seven years as a lawyer after graduating from University at Buffalo’s School of Law.

Both were raised in Buffalo suburbs and still had substantial family in the area, a chief reason for their inevitable return. During the couple’s stay in New York City, the extended family bonded in their rare times together – especially on Justin’s side – through a shared enjoyment of bourbon.

That passion spurred a shift in career focus for Justin, who will host the grand opening of Hartman’s Distilling Co., at 55 Chicago St., on Saturday, Dec. 14. Jen, also an elementary school teacher in South Buffalo, is a co-owner in the project. Her aunt and uncle, Lisa and Bob Hobba, also are partners.

The new distillery and tasting room is connected to Resurgence Brewing Co.’s second location, in the Cooperage complex; their doors are both accessible from the same sidewalk facing west. The tasting room is a sprawling 2,700 square feet, with 20 bar seats, 36 seats at tables and a total capacity of 156, with four TVs spread throughout.

A small “library,” with a couch and cushioned seats, offers a different feel around the corner from the bar. In warmer weather, cafe-style seating will grace the sidewalk.

The Hartmans have hired a staff familiar to Buffalo bargoers, featuring Cameron Rector (formerly Vera Pizzeria) as general manager and Joe Whyte (Buffalo Proper, Patina 250, Casa Azul) with a prominent role behind the bar. While Justin Hartman has done the majority of the distilling early on, Justin Brink is in training to assume greater production responsibilities.

Hartman’s will produce several spirits, but Kentucky-style bourbon and rye – both varieties of whiskey – are expected to be the headliners. Like many craft distilleries, Hartman’s will begin using a sourced product, from Midwest Grain Products (MGP) in Indiana, as the base for the first four years as in-house whiskeys age in oak barrels in their rickhouse. After the four years of barrel aging has concluded, Hartman’s will sell its own product.

Because they don’t require aging, vodka and gin can be produced quickly. Hartman hopes to have a batch of vodka ready by the grand opening, with gin following not long after.

Even with a sourced product, Hartman’s can tailor the flavor profiles of its bourbon and rye through the blending, proofing and filtering processes. Two bottled whiskeys will be available for purchase at the grand opening; straight bourbon, a rye and wheat blend, is $44.99 for 750 milliliters, while the rye costs $39.99.

Both of these can be available solo – neat or on the rocks featuring Buffalo’s Better Days Ice – with a 2-ounce pour costing roughly $9.

A small selection of gin- and vodka-based cocktails – with the Negroni and the lavender mule standing out, respectively – are available, as well as three Zero Proof mocktails.

Beer, wine, hard cider and White Claws are available, too, with a small food menu based on appetizers ($6-$16) and sandwiches ($11-$13). A separate brunch menu will be offered on Saturdays and Sundays, beginning Dec. 15.

The hot pretzels ($11) are served with Dijon mustard and cheddar cheese dips, and have been a hot seller during the soft-opening phase.

• The Cooperage  is the nickname for the brick complex that long held E & B. Holmes – an industrial business that built wooden barrels, key to the aging process of whiskey among other uses.

Even though the Hartmans met with several Buffalo developers and considered sites on Niagara Street and even closer to Canalside, Hartman was sold on the building’s connected history and its rehabilitation by Ellicott Development.

• Justin, his father Steve, and older brother Mike are the bourbon-loving trio who have bonded over the spirit in their rare times together between 2011 and 2018, with Steve in the Alden area, Justin in Manhattan and Mike as a high-profile lawyer in Los Angeles.

They completed the Kentucky Bourbon Trail together and took other whiskey-inspired treks. The Hobbas, on Jen’s side, took an interest, too, which has evolved the business into a family affair.

• Justin took the six-day distillers course at Moonshine University, a hands-on curriculum in Louisville, Ky., then took an intensive three-day course at Black Button Distilling in Rochester. He’s also a certified bourbon steward, an eventual requirement for his entire staff.

He and Jen toured the nine distilleries in Brooklyn to incorporate some elements and invested in the biggest pot still in New York State, which distills 660 working gallons.