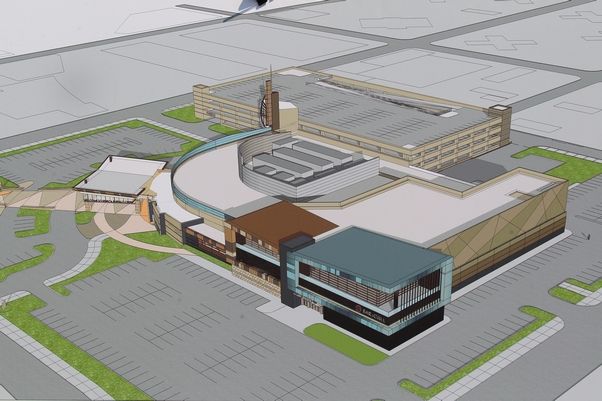 Eight years ago, the Seneca Nation of Indians took a risk on a neglected part of downtown Buffalo, putting up a giant temporary metal shed housing gaming machines at the corner of Michigan Avenue and Perry Street as a placeholder to ensure the tribe maintained its right to develop a casino.

There was no HarborCenter, no Canalside, and few new residents and office workers. And there was significant pushback, including litigation to stop the operations.

But the shed gave way six years later to a $130 million permanent casino facility, with slot machines, table games, a restaurant and sports bar that now brings more than 3 million guests per year through its doors.

And on Thursday, Seneca Gaming Corp. will take it even further, kicking off work on a $40 million, two-story expansion, adding more than 300 additional slot machines, several more table games and another restaurant to the successful operation.

“The economic turnaround of Buffalo is something that many people didn’t think would happen, but look around – it’s happening,” said Seneca Nation President Maurice A. John Sr. “The Seneca Nation is an important part of that movement, and this $40 million investment is more evidence that the Seneca Nation and the City of Buffalo are both on the rise.”

Indeed, the 57,000-square-foot addition comes as the transformation of the surrounding neighborhood continues, with the redevelopment of the Fairmont Creamery building on Scott Street by Carl and Bill Paladino, the expansion of First Amherst Development’s Elk Terminal Lofts with 23 more units, the rise of Canalside, and renewed interest generally in being downtown.

“The Seneca Gaming and the Seneca Nation of Indians have been friendly and inclusive and eager to contribute to improvements in the district,” said developer Sam Savarino. “They are good neighbors and I am very happy they are growing and expanding.”

Sources close to the Nation say there is potential interest among tribal leaders in non-gaming development – such as residential projects – near the casino site, although no decisions have been made.

“I think it will have a positive impact on the community, as I see this area becoming an entertainment and tourist district,” said Bill Paladino, CEO of Ellicott Development Co.

But some community leaders are more reserved. “I’m glad to hear they feel confident that they’re growing,” said Erie County Executive Mark Poloncarz, whose government gets no tax revenues from the casino. “I’ve never been a strong proponent for casino gambling, so it’s not as if I’m sitting here jumping up and down for joy. It does help with job growth, but beyond that, I’m not exactly certain it’s providing that much more of a benefit to our region.”

And consumer advocates and anti-gambling critics remain highly critical of the casino, which they say fuels addiction, poverty and crime.

“The expansion of the casino is bad news for Buffalo’s growth and prosperity,” said Sam Magavern, co-director for the Partnership for the Public Good, which fought against establishment of a casino in the first place. “Casinos, especially those located in high-poverty urban areas, create more costs than benefits for the communities that surround them. For a large number of patrons, gambling becomes an addiction that too often leads to mental illness, bankruptcy, or crime.”

He said a casino hurts communities, and also rejected the contention that it creates jobs. And he said it would eventually create more burdens for taxpayers, not benefits.

“The location of the Buffalo casino, near some of the poorest neighborhoods in one of the nation’s poorest cities, is particularly unfortunate. However much it expands, the Buffalo casino is going to draw mostly from local residents, especially given the rapid growth of gambling opportunities around the state and region,” Magavern said. “Every dollar spent at a casino is a dollar that would otherwise have been spent at another business.”

The Seneca project, which was approved and announced last August, will extend the rear of the casino complex further south toward South Park Avenue, and will create about 440 construction jobs. Because the site is considered sovereign territory of the tribe, no further municipal approvals are needed. Site preparation efforts are already underway by Seneca Construction Management Corp., and active work will begin by the end of the month, said spokesman Phil Pantano.

Work is slated to finish by spring 2017. “We’re going to do it with as little disruption to the operations as possible,” Pantano said. “We’re really looking at continuing business as usual.”

When completed, the casino will have more than 1,100 slot machines and about 30 table games, with 300 new casino jobs. Plans for the first floor call for a high-limit room, an expanded non-smoking area, a performance stage for live entertainment at the Stixx Sports Bar, and a small amount of additional retail space for a gift shop, coffee shop, or similar user. The Buffalo Savors Grill will also be expanded.

“This project is more than an investment for our guests,” noted Barry E. Snyder, Sr., chairman of the Seneca Gaming board of directors. “It is an investment in the people of Buffalo and Western New York.”

On the second floor, officials will introduce a new restaurant, similar to the Western Door Steakhouse at both the Niagara Falls and Salamanca casinos, but more of a bar-and-grill format, Pantano said.

“The addition of the Western Door and other dining and entertainment venues that are part of the expansion just adds to the already robust list of entertainment and dining venues within walking distance,” said Benjamin Obletz, CEO of First Amherst. “We have had incredible demand down there, partially fueled by everything that is happening in the area. The Senecas’ expansion will only add to that demand. The area is quickly becoming the most desirable entertainment district.”

The new restaurant will include both indoor and outdoor seating, and there will be banquet and meeting space on that upper level, Pantano added.

“Downtown Buffalo, and the Inner Harbor area in particular, is exploding with excitement and activity,” said Audrey Oswell, chief operating officer for Seneca Gaming. “As more people come to know this new Buffalo, Seneca Buffalo Creek Casino will be part of what they experience and remember.”