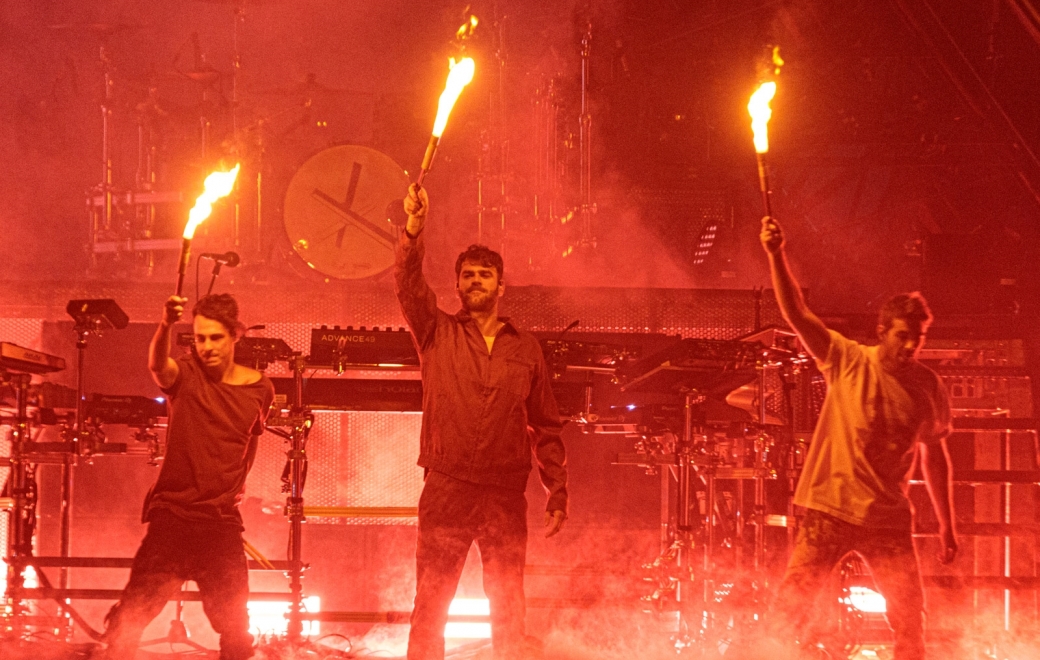 It was the night of the drummer: rollicking rock and rolling, spitting-on-the-stage before a solo, testosterone-fueled drumming that was the magnificent surprise of the Chainsmokers’ EDM show at KeyBank Center on Saturday night, a stop on their “World War Joy” tour. Among the night’s circuslike surprises were flaming drumsticks during the four hours of premium dance and pop sets by three acts: the headliners, along with openers 5 Seconds of Summer, and Lennon Stella.

Focusing on rhythmic glue seems appropriate the week that one of rock’s greatest drummers – Ginger Baker of Cream – passed on to the great gig in the sky. But Mr. Baker, famed for his irascibility, would seemingly have bristled at this mention in a review of highly collaborative DJs and their touring drummer performing ubiquitous dance hits incorporating frequent jolts of pyrotechnics, hardworking smoke jets and, at one moment, three dirt bikes whirling inside a large metal orb.

The Chainsmokers (lead vocalist Drew Taggart, Alex Pall and drummer Matt McGuire) emerged holding flares, lighting pyros onstage as a powerfully visual set opener awash in red lights. Opener “Takeaway” brought Lennon Stella back onstage for one of the duo’s most contemplative hits before a pounding set that kept much of the audience in dance party mode.

Taggart worked the long runway, bouncing merrily along it much of the set, occasionally trotting back behind the DJ consoles with Pall. He’d prance up stairs that magically appeared at the end of the runway for “Everybody Hates Me” – nearly to the rafters – and up higher stairs onstage (in a safety harness for that), and sing inside the menacing metal orb for “Sick Boy.”

“Who Do You Love,” a cheater callout, brought 5 Seconds of Summer back onstage (cue ear-splitting screams) for double-drumming and vocal harmonizing between the two acts. A few songs later Taggart brought audience member Sierra (from Rochester, “Is that local enough?”) up for a dance off and, after she busted out some impressive gymnastic moves, he proclaimed, “She knows she won that one.”

Introducing megahit “Something Just Like This,” Taggart talked about the Coldplay collaboration, telling the audience that Chris Martin was not in the house: all absent vocalists were sampled, or voiced via creepy robotic faces projected on three massive screens. Before closing number “Closer,” Taggart thanked “everyone who came to rage with us on a Saturday night.” Confetti bombs exploded upwards and the band waved adieu.

5 Seconds of Summer would make their own local onstage introduction, bringing “fifth member of our band” out from the wings, tour photographer Andy DeLuca, profiled in The News in 2015. Lead singer/guitarist Luke Hemmings asked DeLuca “If you could say one thing to your home town what would it be?” DeLuca approached the mic and said “Go Bills!”

Their set bounced with jaunty numbers, before singer/bassist Calum Hood said to the adoring crowd: “It’s been a while since we’ve been in your beautiful city. We’re gearing up to release our fourth album next year.” He thanked one and all for helping “define the early years of our band,” before singalong hit “Amnesia.” Set closer “Youngblood” ended with power-drummer Ashton Irwin taking a well-deserved bow on the runway.

More sedate stylings by Lennon Stella – head to toe in a black and silver-sparkling suit – started the night under modest lighting, steering clear of the runway before her. The photogenic singer performed contemplative “Like Everybody Else” behind a keyboard. For “Fortress” she strapped on a pretty guitar, barely strumming it ever. This was ill-advised, those strings would have potentially ruined her perfect manicure.