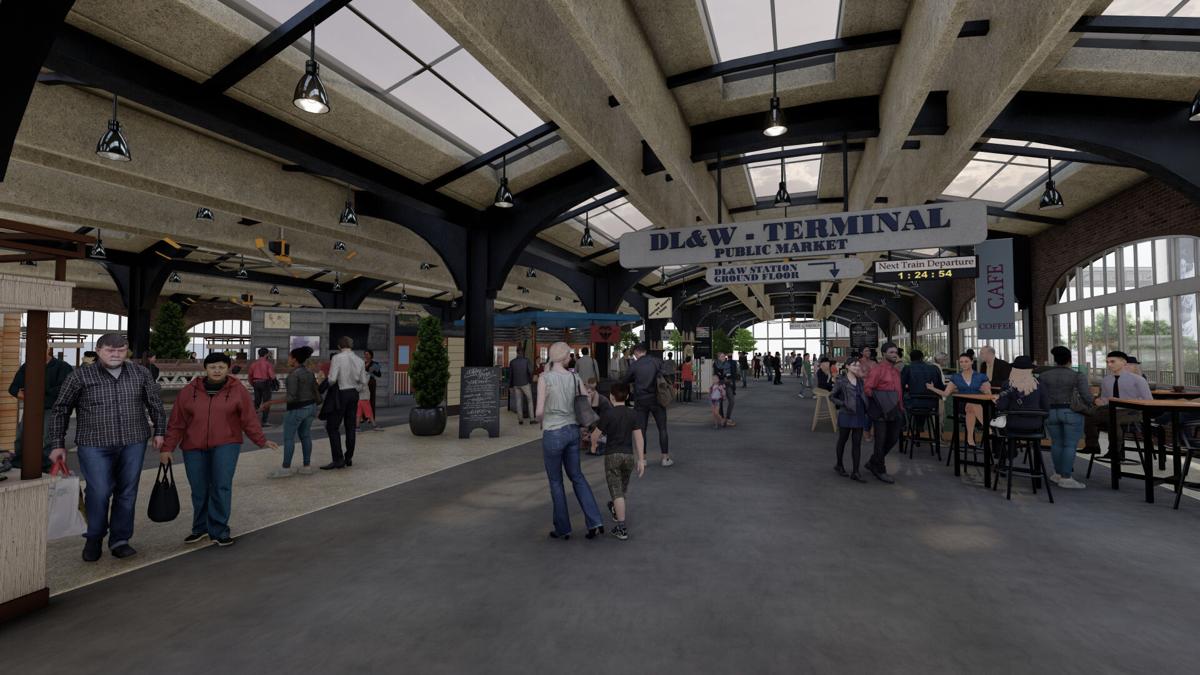 The Editorial Board: Consultant’s plan for DL&W Terminal is worth pursuing even with its higher cost

Originally Published in The Buffalo News

A rendering shows a possible public market at the DL&W Terminal. A new and costlier proposal for renovating the terminal may be worth the cost, if developers can demonstrate a likelihood of success. Rendering courtesy of by Savarino Cos.

Long before the coronavirus pandemic upended much of upstate New York’s economy, the plan to transform the Delaware, Lackawanna and Western Railroad Terminal into a Metro Rail station and commercial center was slowed by a lack of funding.

Work on the $52 million Metro Rail station on the first floor is underway, but it remains to be seen if developer Samuel J. Savarino can realize his plan to make the second floor into a viable public and commercial space. In Sunday’s Buffalo News, he presented a vision that begins that task in a hopeful way.

A consulting firm’s report, commissioned by Savarino Cos., argues for “an inclusive place where the arts, food and music bring people together in a unique multi-use gathering place for the region.”

The report, prepared by the Project for Public Spaces, projects a price tag of $20 million to $30 million, doubling or tripling Savarino’s original estimate for the project. It’s a big investment, but one that Washington may be able to help fund. Savarino and the Niagara Frontier Transportation Authority, which owns the building, need to show that the return on such a large public investment would justify the cost.

Rep. Brian Higgins told The News that he believes federal infrastructure money and historic tax credits would make enough money available to fund much of the project. Higgins and State Sen. Tim Kennedy, a fellow Buffalo Democrat and advocate for the project, will need to convince other lawmakers that the millions they are asking for will be well spent.

The train shed has been the very definition of “disinvestment” since DL&W train service ended there in 1962. Years of neglect led to vandalism in the building, which the NFTA purchased from the City of Buffalo and Conrail in 1979. The agency’s use of the site as a train shed required that the ticketing and terminal areas be torn down.

The terminal had some shops open on the ground floor that did not do well. The grand vision laid out in the consultant’s report would certainly draw more visitors, but success in the neighborhood between Canalside and the Cobblestone District is not guaranteed, even with its proximity to KeyBank Center and Lecom Harborcenter.

Uncovering the buried architectural treasures in the terminal is an ambitious but worthy goal. Savarino pictures the skylight systems and vaulted windows flooding the terminal with natural light after they are uncovered and restored, which will be no small task.
Other challenges have been mentioned in the past couple of years, including:

• Providing truck access to the upper floor’s exterior for delivery and garbage removal;

• Solving the “complicated maze” of underground utilities getting in the way of construction of a northern stair tower.

• Dealing with serious erosion of the DL&W’s seawall along the Buffalo River. The erosion has created sinkholes within the 104-year-old complex.

Buffalo’s can-do attitude toward development and transformation has paid major dividends in the past 15 years, after decades of stagnation and small-ball thinking. The DL&W Terminal is a unique structure that Buffalo should put to work and Savarino’s proposal is worth exploring. Turning the building into a major marketplace and mixed-use attraction will not be inexpensive, but it is a plausible and attractive goal.