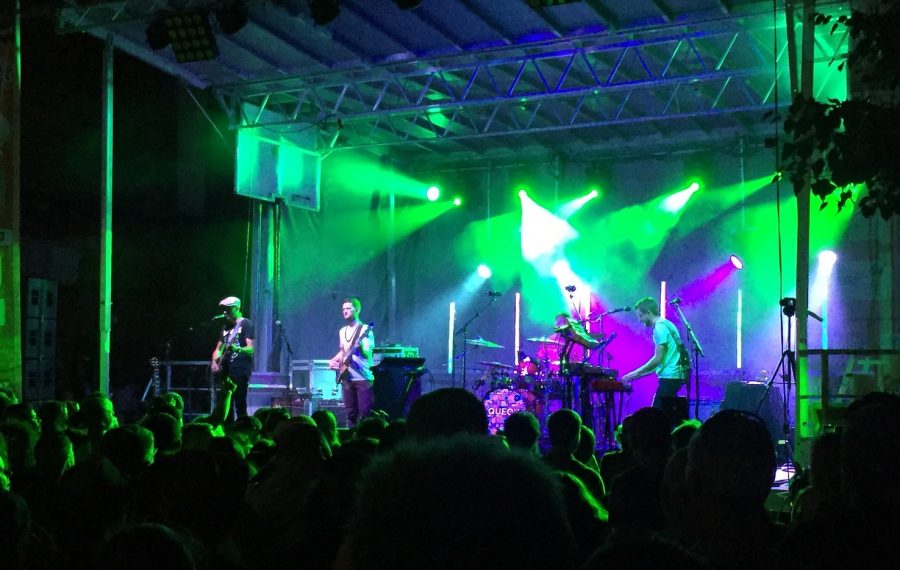 The Music Never Stopped: Year 3 of Cobblestone Live Kicks Off In High Style

Originally Published in The Buffalo News
August 3, 2019
By Jeff Miers

Each year, the festival has grown, moving outward from its home hub – Buffalo Iron Works, at 49 Illinois St. – to surrounding environs, and building in an organic fashion to the point where it now appears poised to transcend its regional roots and become a tourist attraction.

Three years ago, that might’ve seemed like a pipe dream. Now, the fabled historic district is bustling, with new businesses – including the recently opened Labatt House brewery, tasting room and The Draft Room restaurant, at the corner of Perry and Illinois streets – opening and flourishing, and its reputation as a major live music attraction growing.

For year three, performances rotated continuously between two outdoor main stages located on Illinois and Columbia streets, as indoor stages at Buffalo Iron Works and Lockhouse Distillery offered attendees a chance to beat the heat and chill for a bit. Vendors filled the mini-‘Shakedown Street’-style area on South Park, between Illinois and Columbia. Clearly, fans had marked their calendars and made the necessary arrangements in advance this year, because by 5:30 p.m., the place was already hopping, and by the time the sun went down, Illinois Street was jam packed.

As it turns out, Cobblestone Live’s growth has mirrored the growth of Aqueous, the Buffalo band headlining the main stage on Friday evening. Just as that band has grown over the past several years from a hometown favorite into a national touring act capable of commanding the main stage at major festivals like Peach and Summer Camp, so too has Cobblestone Live built its reputation on a grassroots basis.

Though some might consider Cobblestone Live to be essentially a jam-band festival, the lineups have been diverse and eclectic from the beginning, reflecting not just the personal tastes of Iron Works manager Josh Holtzman, who conceived of the festival and books the acts, but of the depth of the local talent pool and the broad palate of the local fans who support that talent.

On Friday, I arrived in time to catch local jazz-based vocalist Alex McArthur and her band on the Iron Works stage, before heading over to the Columbia stage to catch an old favorite, the Canadian alt-country-rock collective known as the Sadies, a band I relish remembering perform at the gone-but-not-forgotten Americanarama festivals outside Mohawk Place back in the day. (Rather fittingly, I spied Marty Boratin, Mohawk Place and Americanarama booker, taking in the band’s Cobblestone set. He appeared pleased.)

After the Sadies’ well-received set, it was back to Iron Works to catch another Buffalo rising talent, in the form of singer/songwriter Blaise Mercedes and her band, which features some of the hottest young players in the regional jazz, funk and indie-rock idioms. Mercedes commanded a sizable crowd inside the club, and her growing confidence as a band-leader is mirrored by the strength of her new material. She killed it.

So did the next act on the Iron Works stage, Buffalo alt-indie-pop outfit Mom Said No, a young group that is being hailed by many as “most likely to make it out of Buffalo in the near future.” I get why that mildly cliché but ultimately flattering sobriquet is so liberally thrown around lately – these guys have the goods, they know how to work the stage, they’re edgy enough to appeal to grizzled old rockers and pop enough to warrant mainstream attention, and they can write memorable hooks like there’s no tomorrow. Oh, and they aren’t afraid of a well-chosen cover, either – their take on an MGMT classic was killer.

Sadly, Canadian power-pop legends (and one of my wife’s absolute favorite bands) Sloan got turned back at the Buffalo border due to visa issues and had to cancel at the last minute. That was a pretty major bummer, but the blow was lessened significantly by Aqueous, who helped their old friend (and former manager) Holtzman out by adding an extra hour to their set. And good god, what a set it was.

With the entirety of the crown now filling Illinois Street, the band turned in a tour de force, pulling from throughout its rapidly growing catalog – and throwing in a rather brilliant cover of Vampire Weekend’s “Sunflower” – and moving with graceful ease and distinct purpose between prog-rock vamps, EDM-flavored grooves, power-pop tropes, anthemic choruses and virtuosic ensemble improvisations. This is one of the finest live bands going right now, and it’s been nothing but a joy to watch them grow into their rightfully earned headliner status.

Most of us headed back to Iron Works after the epic, marathon Aqueous set, to watch erstwhile Every Time I Die frontman-supreme Keith Buckley lead his troop of stalwart Buffalo musicians known as Soul Patch through a set of classic 1990s alt-rock nuggets. These guys just plain killed it, covering everything from Spacehog to Alice in Chains with skill and a pleasing punk attitude. Oh, and Buckley, in case you’ve been living under a rock, is one of the best in the businesses when it comes to firing up a crowd. Amazing.

Man. What a vibe! I’m already looking forward to next year, and Cobblestone Live is only half over – the festival continues Saturday. A full schedule is available here.