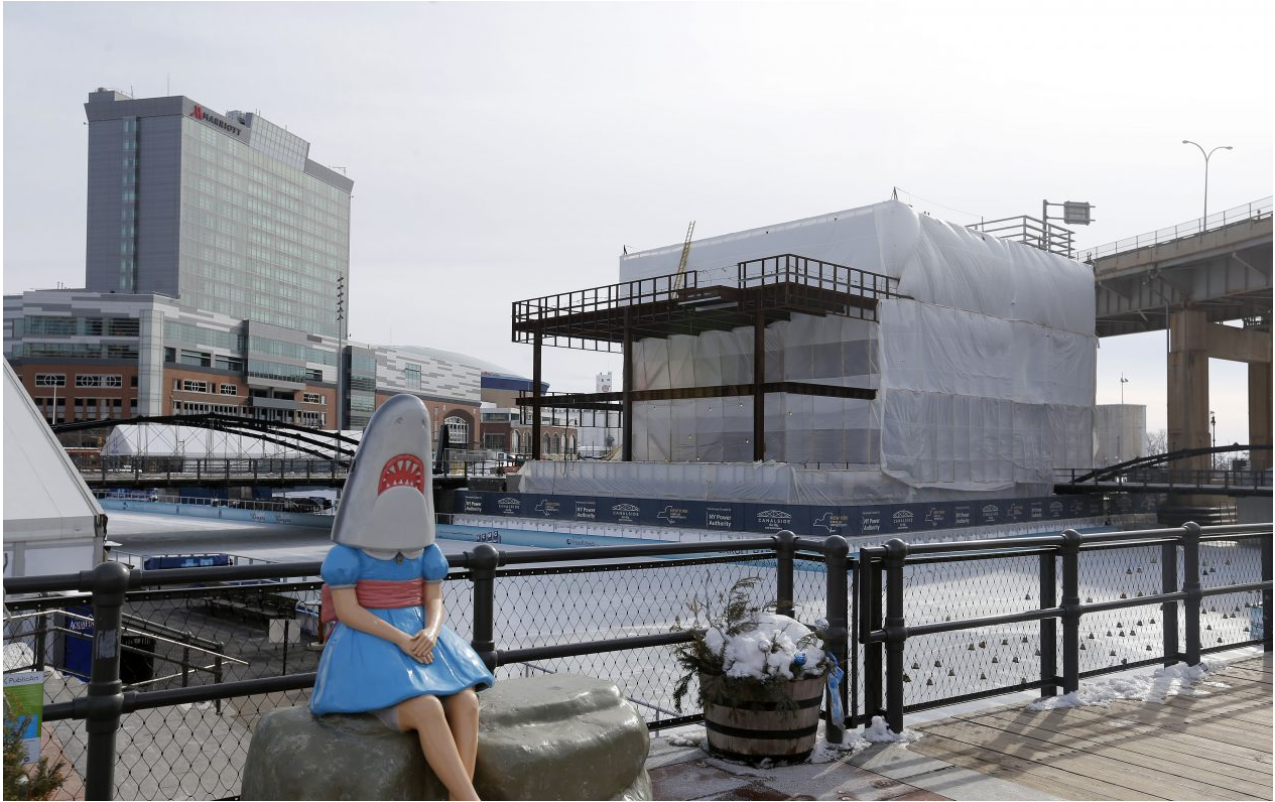 Originally published by The Buffalo News
February 14, 2018
By Mark Sommer

A steel frame rising four stories above Canalside came as the first mighty sign that a children’s museum will come downtown.

Today’s announcement of a challenge grant marks another.

The Ralph C. Wilson, Jr. Foundation will award $6 million to the project if the museum raises $6 million on its own. One-half of the foundation’s grant will go toward construction and the other half to establish an endowment.

“There’s almost nothing my husband could do for Valentine’s Day that would top this gift,” said Michelle Urbanczyk, who began her job Monday as Explore & More’s executive director.

“It’s a generous and amazing donation, and there are no words to express our thanks,” she said. “It’s also a testament to the Ralph C. Wilson, Jr. Foundation’s faith in what we can bring to this community.”

With the Wilson grant, the museum will have raised $16 million of the $20 million it is responsible for raising. The $29 million project received $9 million from the state’s Erie Canal Harbor Development Corp. to build the shell and core of the building.

“We’re also delighted that Explore and More is putting Mr. Wilson’s name on the building,” Egner said. “It certainly speaks to his legacy as an investor in this region.”

The Wilson Foundation agreed to fund the project because the Canalside attraction is expected to spur economic development, Egner said. Also, he cited the museum’s role in benefiting early childhood education and providing after-school programs.

The matching grant requires the $3 million being used for the build-out to be matched by other donors within two years. The match for the endowment has a four-year window.

The museum will also have the opportunity to take up to $250,000 from the first $1 million raised for the endowment for up to four years.

“It’s a way to bridge early revenue gaps that may appear while waiting for the endowment to produce revenue on its own,” Egner said.

“We were concerned that the endowment fund may not produce enough revenue to cover early shortfalls,” he said. “By the time you wait for an endowment to produce revenue, many times it’s too late because you’ve already had your revenue gaps.”

Explore & More, founded in East Aurora in 1994, announced its move to Canalside in 2012. A change of sites at Canalside delayed construction and led to higher costs.

The museum is expected to open late this year or in early 2019.  The museum, with a $3.1 million operating budget, expects to attract 250,000 visitors in its first year.

The matching grant component is a particularly effective way to raise additional funds, said Ted Pietrzak, the capital campaign director. That was his experience, he said, when he led a capital campaign for the Burchfield Penney Art Center.

“A matching grant is probably better than just getting the $6 million straight out,” Pietrzak said.

The amount of the grant is beyond what anyone had imagined, said David McNamara, who chairs Explore and More’s “Play it Forward” capital campaign.

“We knew we were in a tremendously generous community,” McNamara said. “But when we embarked on this undertaking, we did not project that we would have a single, $6 million donor for our capital campaign and endowment fund.

“The Wilson Foundation’s process for determining the organizations worthy of its support is a very rigorous one, and their commitment, I think, speaks volumes about the importance of the project to this region,” he said.

Explore & More will not sit on its laurels, McNamara said.

“In campaigns of this nature, the last dollars are the most difficult dollars to raise,” he said. “We still have a significant challenge ahead of us.”

Delaware North, Paul A. Saffrin Foundation, Wegmans Food Markets and Wegman Family Charitable Foundation, and the WNY Power Proceeds Allocation Board have given $1 million to $5 million to Explore & More. About two dozen contributors have given at least $100,000.

Among larger grants in Western New York, Jeffrey Gundlach has pledged a total of $52.5 million to fund the Albright-Knox art Gallery’s expansion project. He gave the first $42.5 million in 2016 – the largest single gift to a cultural institution in Buffalo history.

Jeremy Jacobs, chairman of Delaware North, provided $30 million to the University at Buffalo in 2015 for the new Jacobs School of Medicine and Biomedical Sciences on the Buffalo Niagara Medical Campus.

The Explore & More matching grant counts as one of the 3-year-old Wilson Foundation’s largest grants.

The foundation gave $10 million to the Community Foundation for Greater Buffalo for its sports and recreation fund, and provided a $6 million matching grant to the Albright-Knox Art Gallery.

The Wilson Foundation has until December 31, 2035 to spend $1.2 billion in Western New York or southeast Michigan. In three years, the foundation has given out $180 million in grants.