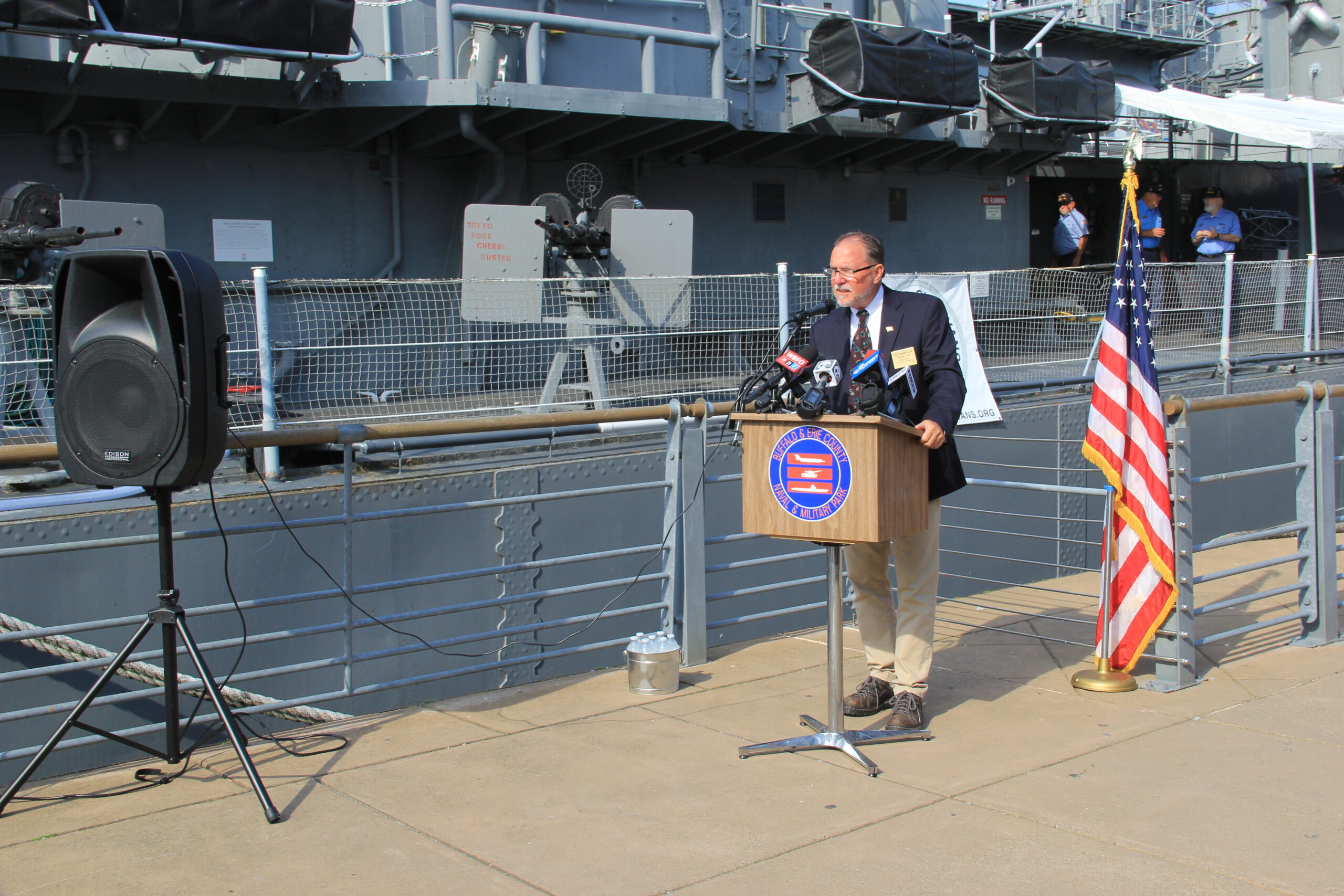 Work Begins on Hull Repairs to USS the Sullivans

Progress has been made on the $1,000,000 Campaign to Save the Sullivans. The Buffalo and Erie County Naval & Military Park has begun repairing the hull of the USS The Sullivans. Special equipment, barges and divers are now onsite and working on the ship’s fragile hull. Their press release today gave updates on the progress made towards their 1,000,000 Save the Sullivans campaign. The message behind their campaign is “stick together” and no place does that better than Buffalo, NY. 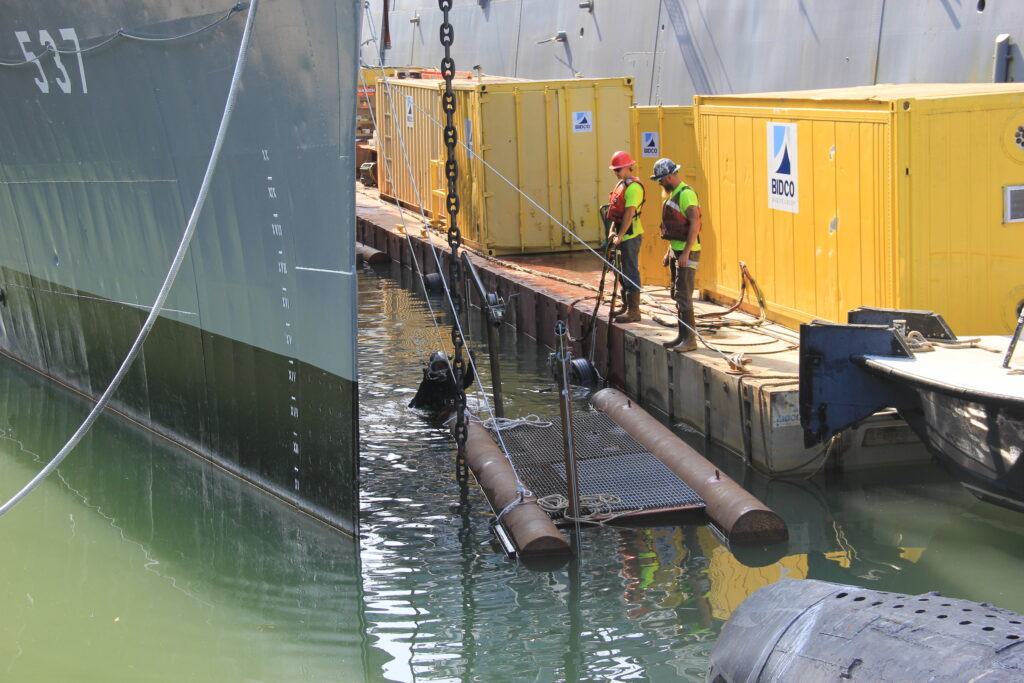 USS The Sullivans (DD-537), a 78-year-old Fletcher-Class destroyer that saw action in World War II, the Korean War, and the Cold War is a major attraction at The Buffalo and Erie County Naval & Military Park. USS The Sullivans is named in honor of the five Sullivan brothers who, serving together on the light cruiser USS Juneau, were all killed in action on its sinking around November 13, 1942. The ship was christened by the fallen brothers’ mother, Alleta Sullivan, and is a National Historic Landmark. It holds a special place in our nation’s military history and a special place on the Buffalo Waterfront. 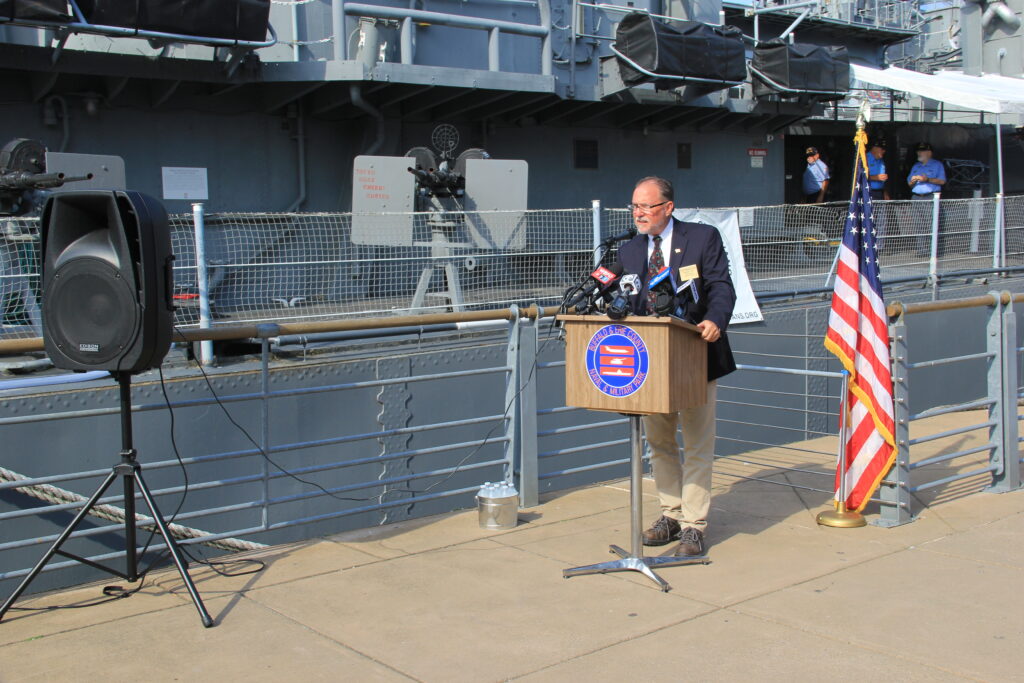 Paul Marzello President and CEO for the Buffalo Naval Park

“We are excited and relieved that today we have ‘divers in the water’ and repairs work has begun in earnest to save this historic ship.” commented Paul Marzello, president and CEO for the Buffalo Naval Park. Work is being performed by BIDCO Marine Group, a locally owned specialty marine contractor. “BIDCO previously conducted a full bow-to-stern survey of the hull and developed the repair plan that includes applying a two-part epoxy coating to the entire hull below the waterline and the installation of a cathodic protection system that will prevent further corrosion of the USS The Sullivans, the USS Little Rock and the USS Croaker.” added Marzello.

In February of 2021, damage to the ship’s hull resulted in leaks that put the ship in danger of sinking, The Naval Park launched a special fundraising campaign, Save the Sullivans, to raise the $1,000,000 needed to complete the repairs. Douglas Jemal of Douglas Development volunteered to act as Campaign Captain of Save the Sullivans. Kelly Sullivan, the granddaughter of Albert Sullivan, the youngest of the five Sullivan brothers, is Campaign Co-Captain with Jemal. Kelly Sullivan, sponsor of USS The Sullivans DDG 68, is a third grade school teacher in Waterloo, Iowa.

Since March, the Save the Sullivans campaign has raised more than $550,000 towards the one million dollar goal and has entered the final stage of the effort. The Naval Park has set a goal of raising the additional $450,000 by October 31, 2021. The Campaign team actively seeking donations from a variety of sources including the general public, foundations, corporations and government entities.

The repairs are now underway and predicted to take about 4 months to finish. Thanks to the donations from 28 states, 7 countries, and the generous people of Buffalo and Western New York this campaign has been able to come to life. Every amount given is appreciated and makes a difference. Even a young boy, Arrow, showed his support for the campaign and donated a bag of coins of his own money to help Save the Sullivans. 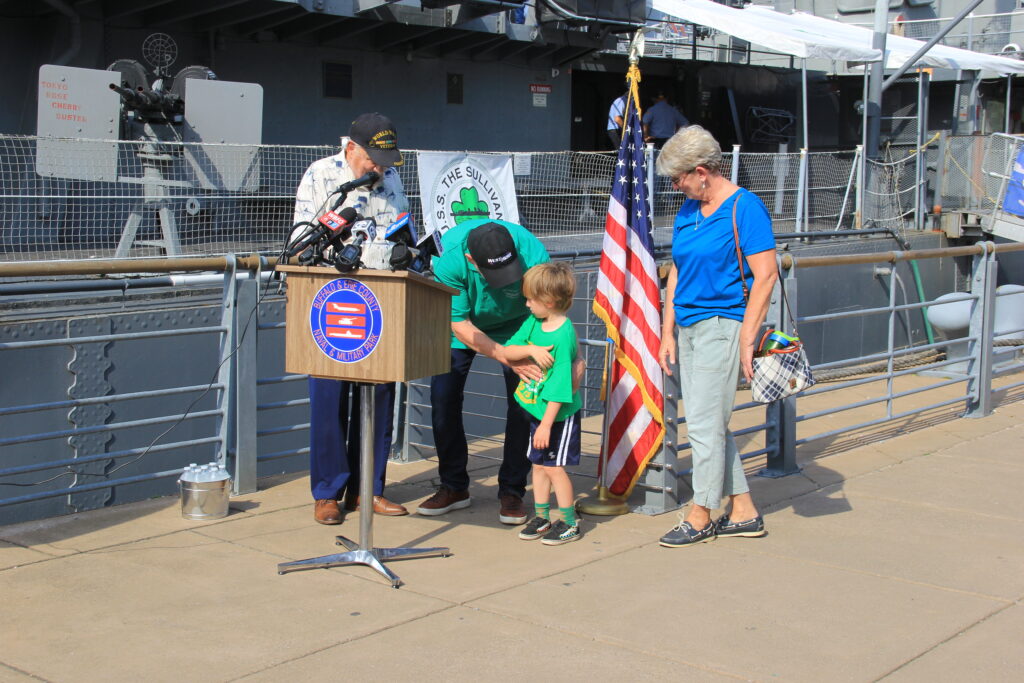 Douglas Jemal with Arrow and his grandmother

Although much progress has been made to reach the 1,000,000 goal, there is still $450,000 to go. Contributions to the Save the Sullivans campaign can be made securely online at SAVETHESULLIVANS.ORG or by mailing to Buffalo and Erie County Naval & Military Park, ATTN: Save the Sullivans, One Naval Cove, Buffalo, New York, 14202, or by calling the park directly at 716-847-1773, EXT 10. For more information visit the buffalonavalpark.org