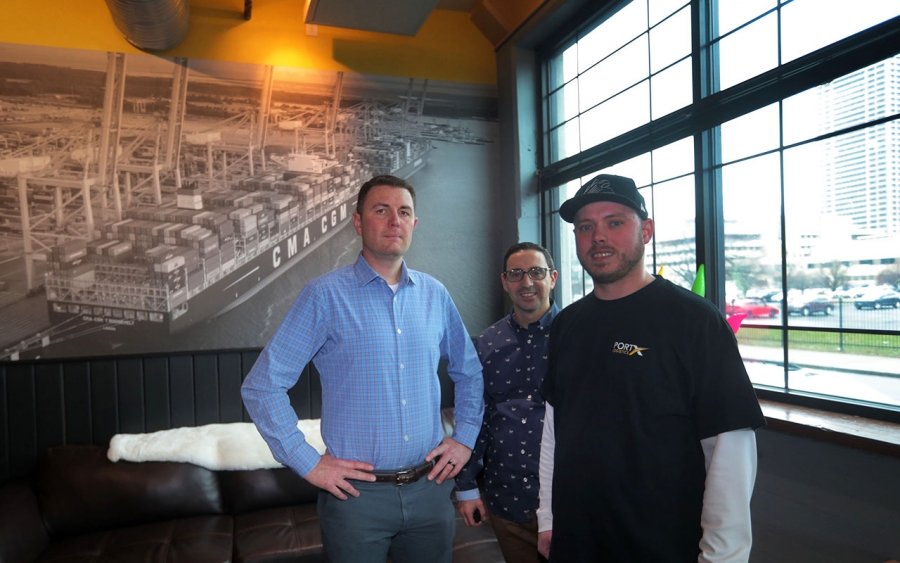 Like other millenials, Adam Cunningham and his colleagues used to frequent the former Lagerhaus 95 bar and restaurant in Buffalo’s Cobblestone District.

It was close to their new company’s office, the “atmosphere was excellent” for happy hours, and they “had a lot of fun,” he recalled.

Now, two years later, they’re no longer frequenting it for beer. They’re occupying it – for trucking.

What had been a watering hole around the corner from KeyBank Center and Canalside is now the headquarters of a nationwide transportation firm called Port X Logistics. The reconfigured space no longer looks exactly like an eatery, but it’s also unique for an office – although perhaps fitting for one that is dominated by young employees in their 20s and 30s.

Today, the bar and beer are gone, but the original lights, three televisions and industrial kitchen remain. There’s also a beer fridge.

“Work can be a drag,” Cunningham said. “What our goal here is to provide an atmosphere where people really love to come in to work.”

The wood floor – which had suffered through years of spills and other rough treatment – is now encased in epoxy to preserve and smooth it. And the staff at their desks on the elevated platform can look out onto Perry and Mississippi streets through the restaurant-style windows and balcony outside.

“It’s a breath of fresh air, and it’s allowed us to attract some younger talent,” said Patrick Morrison, who co-founded the company in October 2017 along with Cunningham and five other friends.

That’s been key to the growth of Port X, which now has 16 employees in Buffalo, plus others in California, Montana, New Jersey, Georgia and Germany. Besides Cunningham and Morrison, the other founders include Brian Kempisty, Arshnoor Randhawa, Tom Zeis, Tyler Pulbrook and Jill Rice.

“For a smaller company, we’re bicoastal,” Cunningham said. “We’re on the east and west coasts. We do quite a bit.”

Ironically, “for as much as we’ve expanded in Buffalo, we don’t really have any customers in Buffalo,” Cunningham said. “We’re dealing pretty much with people across the nation.”

But it’s also another example of the new kind of company that Buffalo is luring and creating – smaller, technology-oriented service firms whose offerings and atmosphere can appeal to the younger workers who are staying in or returning to Western New York. The firm’s starting salary, with no prior experience in transportation, is $46,000.

“There’s a lot of young talent out there, and people aren’t familiar with this industry,” Zeis said. “We are offering something a bit different that really hasn’t been offered in this area, and we’re offering an opportunity for someone to be involved in a startup. … It’s an amazing experience for that person.”

“Buffalo is much different than it was when we graduated,” Zeis said. “College students, they’re seeing what’s happening in this area and seeing that there are opportunities for them. You hear a lot of good feedback about the city, and it’s awesome. You wouldn’t have heard that 10 to 15 years ago.”

The technology-based company coordinates ground delivery of freight from ports across the country, using sophisticated tracking systems and personalized customer service to ensure the cargo gets to its destination. Much of that work is handled from its headquarters in the Lagerhaus space in Buffalo, where its computer-savvy young staff is trained to oversee the entire process from start to finish.

Port X has 10 trucks of its own in Oakland, Calif., but mostly acts as a middleman to connect customers who have shipments to the trucking firms and drivers who can transport them. It doesn’t get involved with shipments by air or water, but only takes over once the materials are on U.S. soil. And it focuses largely on handling the niche, specialty or emergency needs of its customers, rather than competing with industry giants for the regular bulk business.

Today, the firm works with about 100 customers, including UPS Supply Chain Solutions, FedEx Trade Networks and DHL Global Forwarding – each with multiple locations. Many of the customers are “freight-forwarders,” who facilitate international trade.

The firm uses about 200 carriers to handle about 1,300 shipments a month – ranging from a simple local pickup and delivery to a cross-country move. Its annual revenues currently total about $30 million, but the partners are aiming for $48 million within a year.

“Even though we have this awesome technology that we implement in our day to day, we are at our very core of us, truckers. We are moving freight from one place to another,” Cunningham said. “It’s just that the way we go about it is revolutionary, so that we don’t look and feel like truckers. We are basically a service company that offers trucking services.”

Port X originated from the disillusionment of its founders with the existing trucking and logistics industry, particularly with the basics of customer service. The seven friends all grew up in Western New York, went to college locally, and met while working in the transportation field. They worked for different firms, but shared similar experiences.

“We noticed that there was a void in the trucking industry,” Cunningham said. “We felt that customer service had kind of gone by the wayside. We noticed that people had lost track of some of the mundane things – the pleases and thank-yous.”

They also saw opportunities for more efficient and effective service for customers, using newer technology to benefit customers. They partnered with a startup technology company called Turvo in Silicon Valley, and jointly developed a transportation management system and an app for drivers that allows more precise tracking of shipments at any time.

The Turvo system and app – which the drivers are required to use for Port X jobs – allow customers to go online and easily find their shipments 24 hours a day, using any electronic device or platform. That offers what the industry calls “end-to-end visibility.”

“Everybody wants to know where their freight is at all times,” Morrison said. “If they want to find out what’s going on with their shipment, they just open up the app. They don’t even have to call us or email us.”

They can also use the app to send a message to Port X or retrieve key documents. That’s in contrast to traditional transportation management software that are “clunky and outdated,” Cunningham added.

When the group came together, they started with five people in Buffalo, plus one each in Oakland, Calif., and Montana, where Kempisty and Randhawa had relocated, respectively. Kempisty and Randhawa pursued sales, while the five here constituted the “war room” to get the company off the ground and service customers.

In Buffalo, the team took up space at 95 Perry St., in the first-floor former office that had been used by Philadelphia-based Global Spectrum, the company that briefly operated Canalside. The space was tight, with walls, desks and a conference room, but not “much room to grow,” Cunningham said. “We were all huddled together in this room here.”

Within six months, they started exploring options – including on Main Street next to Shea’s Performing Arts Center and another spot in Allentown. But just as they were starting to worry about what to do, they learned that the Lagerhaus restaurant next to them was being vacated. So they called their landlord, Samuel Savarino, to express interest and see the space.

The $50,000 renovation included knocking down the walls between the firm’s old 2,100-square-foot office and Lagerhaus, and redoing the entire space. The expansion more than doubled the firm’s footprint to 5,300 square feet, and gave it the openness that the founders desired. There was even room for a “relaxation and entertainment” area, with beanbag chairs and a place to eat.

“In the winter, you’re pretty much stuck in here. Nobody wants to go anywhere. You’re stuck at your desk,” said Zeis, one of the other founders. “So to have a space like this for people to get away from it for a little bit is perfect.”